I surrendered the attempt to create beautiful art for the purpose of demonstrating how media can impact the feel of an image. My inspiration came from watching crows above the snow laden tree in my front yard on a cold, sunny afternoon. Contrast and complimentary colors create an open, high energy feel, as seen on the top plate pictured below, most representative of my inspiration. Using a background media which doesn’t contrast, or changing the color of shapes so they are similar shades to the background can either result in a fuzzy, unfocused feeling, or in an intense, turbulent feeling. These may be seen in the middle and bottom plates, respectively. 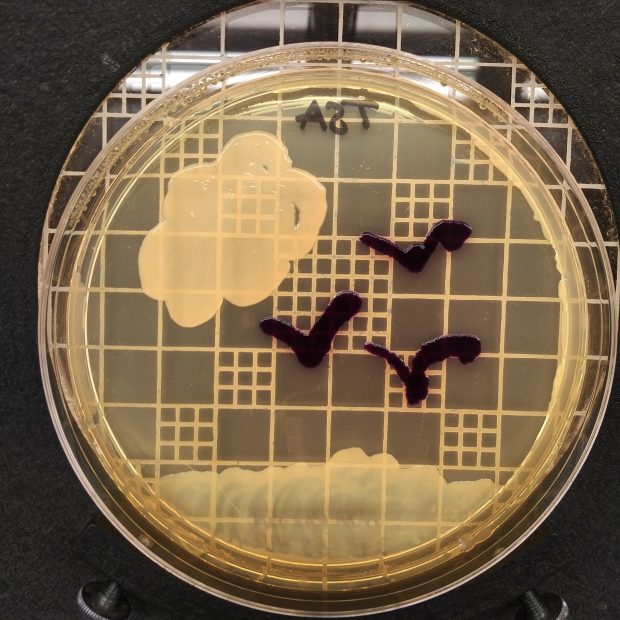 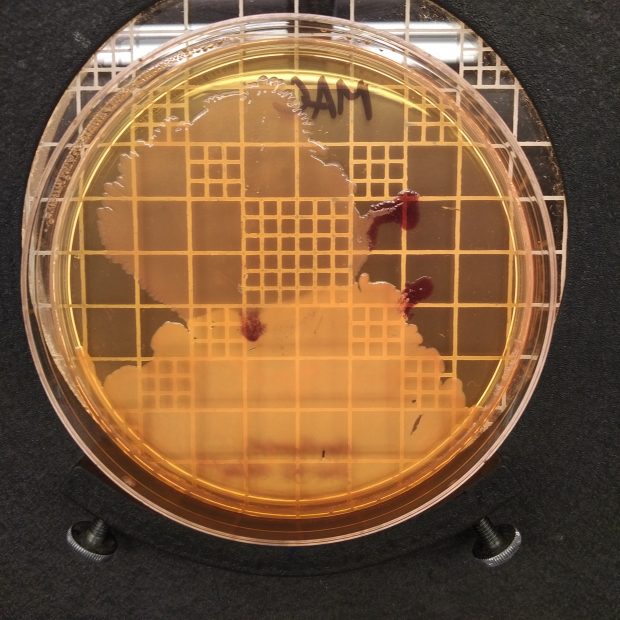 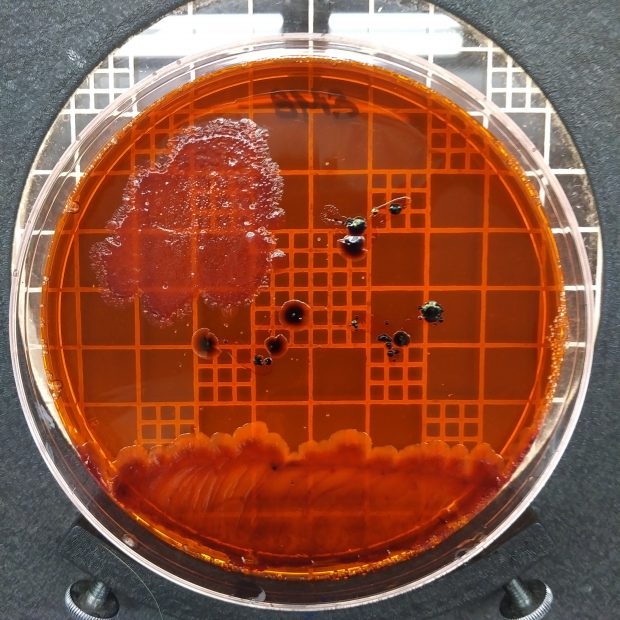 Role of Media in Color Spectrum

On the top plate the media is Tryptic Soy Agar (TSA), a standard complex medium. The background on this plate remains a neutral color, and microbes growing on it develop colonies which are colored by their natural pigments (pink for S. marcescens, deep violet for C. violaceum, and white for E. aerogenes). The cloud on this plate is a very light pink, typical of a young colony of S. marcescens.

The middle plate is Eosin Methylene Blue (EMB) agar, a medium which is selective for (does not inhibit the growth of) Gram negative microbes. EMB   is also differential, in that it changes in response to fermentation products. Lactose and sucrose fermentation create acidic products, which turn eosin red or black. By consuming the medium, strong fermenters turn black with a metallic green sheen. If the organisms ferment but produce less acid, they turn pink to red on EMB agar. This can be seen in the light pink hue of the tree top on the middle plate. (I had hoped for stronger fermentation effects.) Non-fermenters should retain their original colors. The microbes on this plate found something delicious, and overgrew in just 17 hours of incubation after being painted on the EMB agar. The microbes in the birds were out-competed for the limited resources on the plate.

The bottom plate is MacConkey (MAC) agar, which is also selective for Gram-negative microbes and differential in response to fermentation products. MAC agar contains peptone rather than sucrose, in addition to lactose. The pH dependent dye in MAC agar lightens to pink from the products of lactose fermentation. Again, this is seen in the pink hue of the tree top on the bottom plate. Non-lactose fermentation lightens the agar even further, and produces white or colorless colonies on light pink to translucent agar. None of the microbes used were non-lactose fermenters, so the agar has only a halo of lightening around the tree top. The pink color of the cloud on this plate is not explained by the plate’s differential nature, as non-fermenters should retain their original colors. The darker pink is more representative of mature S. marcescens colonies. The C. violaceum grew colonies only in the most densely painted parts, perhaps in response to some agar quality. 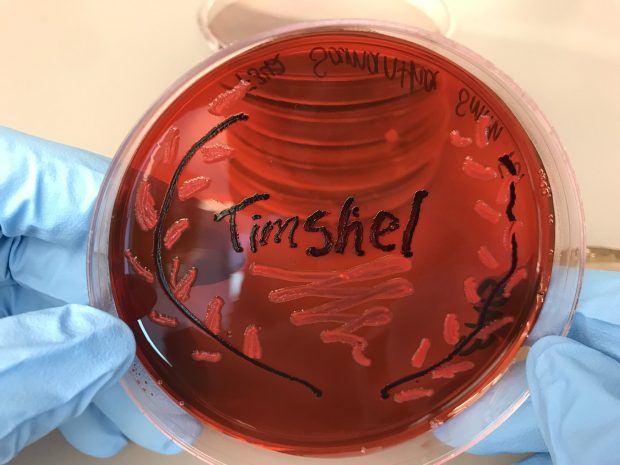 Just a wink and a nudge to my favorite book “East of Eden” by John Steinbeck. I have a a pretty cross stitch of this at home, which admittedly looks a lot better. Perhaps I will stick to my day job and leave the microbe painting to those more artistic than myself.

I used the Eosin Methylene Blue Agar plate for this painting, hoping to achieve a stark different in coloration from the two sources I chose. The lettering and the vine were done with Escherichia coli.  This bacteria is gram negative so is not inhibited by the eosin or methylene blue of the medium. It also produced a deep black color with a metallic green sheen as it ferments lactose with strongly acidic end products. (The green sheen is actually quite pretty, though you can’t tell from the photo). The filigree and leaves are colonies of  Enterobacter aerogenes  which is also gram negative. It produces a pink color because it does ferment lactose, but the end products of fermentation are much less acidic than that of  E. coli.

I would like to add that I had a lot of fun in this assignment and seeing the variety of agar art from the ASM Agar Art Contests. 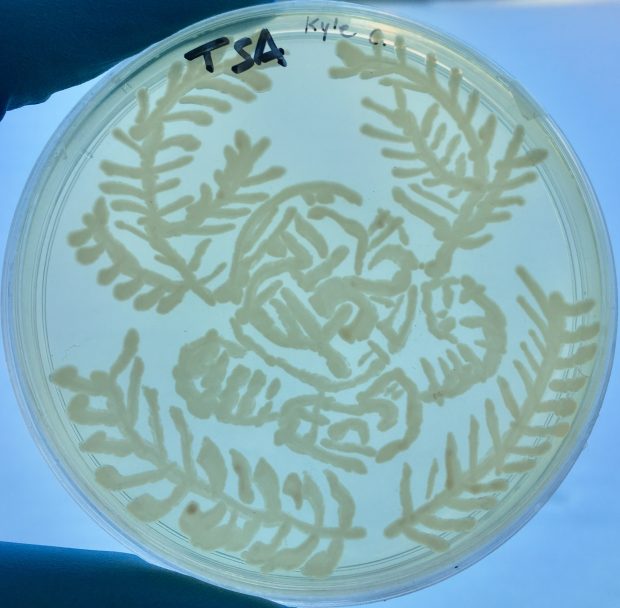 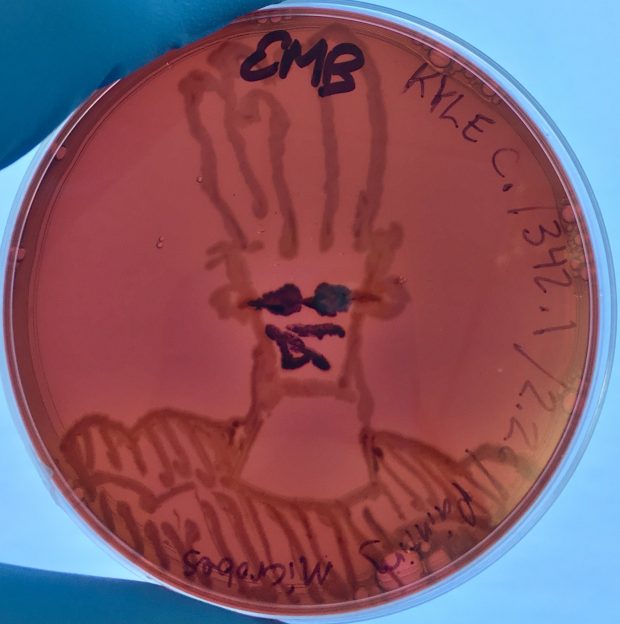 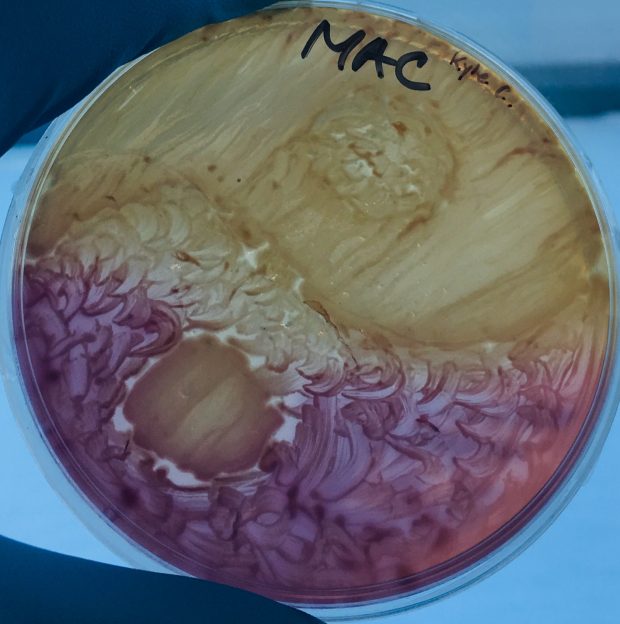 Hello All. My name is Maggie. Please don’t mind me when I sign off   with “MM Ragusa.” Old habits die hard, and I learned a long time ago that a little ambiguity can reduce a lot of judgement. So I like to keep ’em guessing…

I saw some of the Painting with Microbes pieces from previous semesters, and I was interested in how it was done.   Here’s a You Tube video, in case you’re interested too. Some of it is truly amazing artwork! I have no aspirations of creating anything more impressive than a smiley face, but it’s awesome to see what can be done, when you know your medium. (In this case, the medium is microbes!)

Here’s the winner of the 2018 American Society for Microbiology’s Agar Art contest:  “The Battle of Winter and Spring’ by Ana Tsitsishvili. 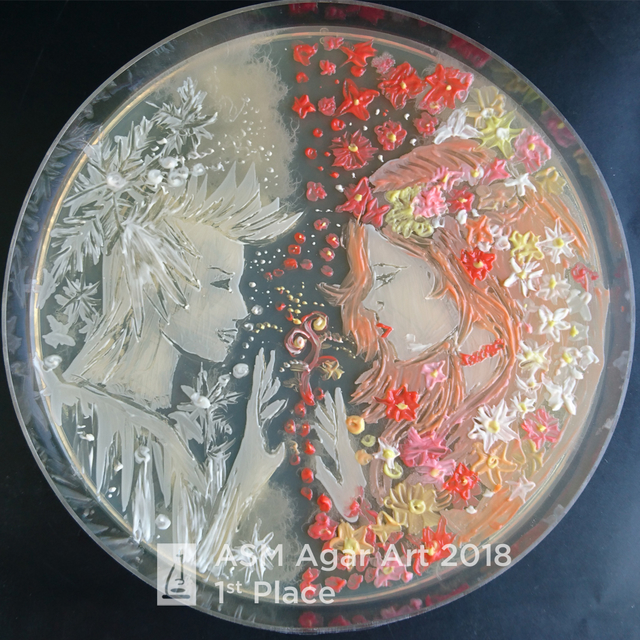