For this study, we sampled a kitchen dish towel and isolated a salmon-pink colony that turned out to be  Deinococcus radiodurans: the most radiation resistant organism in the world! 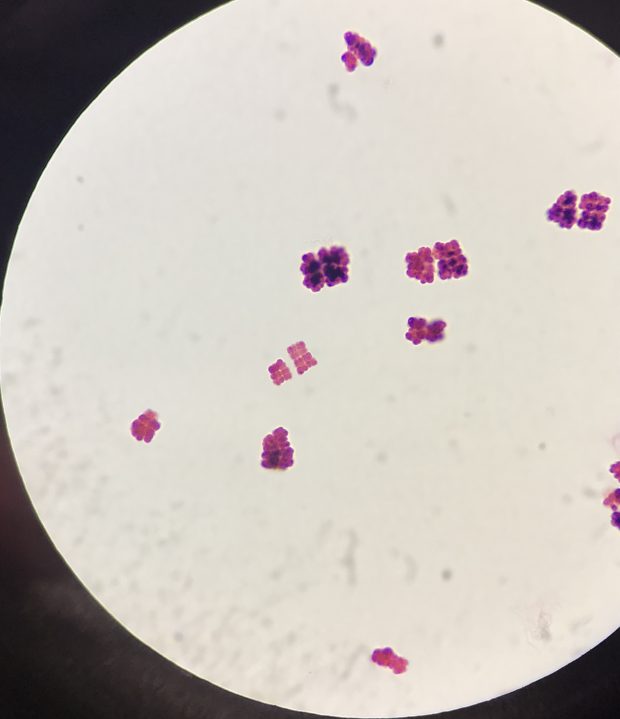 Article:  Study: Much of the surface ocean will shift in color by end of 21st century

Summary:  Researchers at MIT have developed a model that simulates how the colours of the ocean may change over the next 100 years due to climate change. Their model looks at the colours of the ocean as seen from a satellite, where green hues indicate a greater concentration of algae and phytoplankton while dark blue hues indicate a lack of significant algae growth. Their model predicted that the subtropics will turn a deeper blue colour, indicating less phytoplankton growth and therefore less life in general. Meanwhile, the poles may turn a darker shade of green from increased algae blooms due to warming temperatures. These changes in levels of algal growth mean that entire food webs could be significantly altered by the end of the century, which would have significant impacts worldwide.

Connections:  This article is a good reflection of how microbial ecology can have a big impact on our world. Changes in microbial activity in the oceans over the next century could be big enough to be seen from space! And since life in the ocean is very dependent on levels of microbial growth (microbes make up the base of most ocean food webs) these changes could have dramatic impacts on all domains of life.

Critical Analysis:  I really enjoyed reading this article. It was easy to read and seemed to summarize the MIT study really well. I am somewhat cautious about this model, because I have not seen proof of its face and predictive validity, but I am sure if I read the entire peer-reviewed paper in depth it would prove to be a fairly accurate model for ocean colour change. Overall, this article was well-written, informative, accurate and easy to understand.

Question:  If the algal growth in our oceans changes as much as it is supposed to, how can we model these impacts on ocean food webs and what would those models show us? 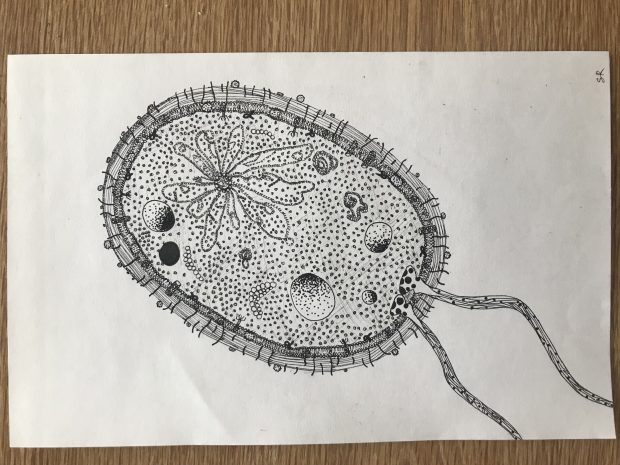 My piece is a type of art called zentangling. It uses fine point black markers to draw small details to create a picture. I drew a facultative aerobic gram-positive bacterium with two flagella that I named Zenteria. I also incorporated other microbes into my overall drawing. The cell wall is made of cyanobacteria, each lipid in the plasma membrane is a bacterium with two flagella, and the transmembrane/membrane associated proteins are made of viruses. I drew ebola viruses, bacteriophages, rhinoviruses, herpesviruses, rabies viruses and hepatitis B to represent the different proteins you might find in the plasma membrane. For the flagella, I drew fungi with the fruiting bodies at the base of the flagellum (embedded in the cell) and the mycelia extending down the length of the flagellum. Within the mycelia you can see the nuclei of the cells. In the interior of the cell, you can see the chromosome attached to DNA organizing proteins as well as three additional plasmids. I have also drawn some inclusions in the cell. The large circles are poly- Î² -hydroxybutyrate (PHB) inclusions which are lipids that are stored by many bacteria for use as a carbon source under anaerobic conditions. The smaller granules that are clumped together are sulfur granules which are used by bacteria found in hydrogen sulphide rich environments.  Zenteria  are bacteria that can metabolize both carbon compounds and sulphur compounds.  The small circles scattered throughout the cell are ribosomes, and the large black circle is a group of photoreceptor proteins which allows the bacterium to be light sensitive (needed for photosynthesis using sulphur).

Of course, my representation of a bacterium is not 100% accurate, but I really enjoyed drawing the small details and incorporating other microbes into the overall picture.

Bacteria in probiotics can evolve in your gut and turn nasty, study shows  (The Independent)

Summary:  This article talks about a study performed at the University of Washington in Missouri where a probiotic evolved to attack the protective coating of the intestine in the mice they tested. Unhealthy mice with low gut microbial diversity were more likely to develop an evolved strain of the  E. coli Nissle bacteria that was used in the probiotic they studied. According to the researchers, their findings have implications for the development of safer probiotics in the future.

Connections: This article is very relevant to the human microbiome section that we covered in class. It involves the gut microbiome and the ways it can be more or less healthy, and more or less diverse. I think the way microbes can change and evolve right under our noses is fascinating!

Critical analysis: This was certainly an interesting piece and the writing style flowed well. However, this study is only one of many and might mislead readers to think that all probiotics can “turn bad.’ It could also be confusing to the regular reader, because the wording of the article makes it seem like probiotics are drugs that can change inside your body. Of course we all know that probiotics are made up of living bacterial cells that are supposed to help enhance the diversity of your gut microbiome. It was also unclear whether the  E. coli strain always evolved in a negative direction or if it was simply more prone to evolve in an unhealthy gut microbiome (toward good or bad characteristics, we don’t know). Overall, this was a well-written article, but I think the writer conveyed what he wanted the readers to believe and not necessarily the actual truth of the study.

Question:  What were the exact parameters of the evolution of  E. coli Nissle observed in this study? 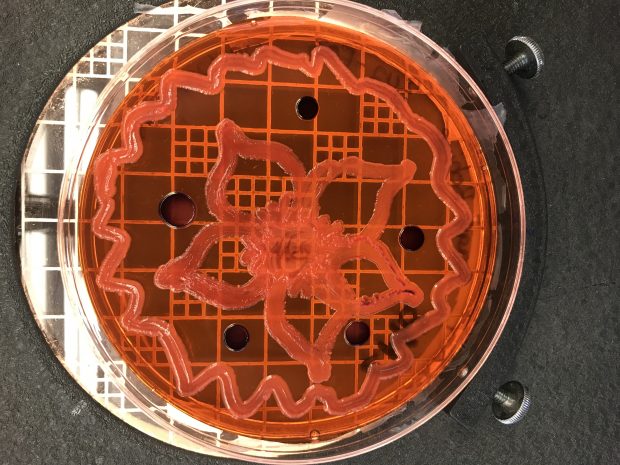 I decided to “paint’ three different flowers for my microbial art. The one pictured above is my favourite. It is drawn on Eosin Methylene Blue (EMB), which selects for gram-negative bacteria. Lactose fermenters (or other fermenters that create acidic products) cause the medium to turn red or black, and may even turn the colonies black. Fermenters that produce less acid turn pink or red, and bacteria that don’t ferment look translucent or pink in colour.

In my case, the medium stayed about the same colour. I used Escheria coli for the center of the flower. It turned a light pink colour, but not black like I expected (since it is a strong lactose fermenter). I used Serratia marcescens for the petals of the flower, which were a very light shade of pink/white (non-fermenter). Enterobacter aerogenes created the circle around the outer edge of the plate and was a beautiful shade of darker pink/purple (fermenter). The black/purple dots were Chromobacterium violaceum which I thought would become more lightly coloured since it is a non-fermenter. The plate looks better in person, since it is easier to see the various shades of pink.

Summary: CRISPR is a natural bacterial immune defence, but some bacteriophages (or viruses) have developed anti-CRISPR genes that cause bacteria to lose immune defence when infected. New anti-CRISPR proteins were discovered by using protein functionality tested across a variety of environments, rather than using DNA and culturing. Their discovery could lead to the development of better technologies in the emerging field of CRISPR gene editing.

Connections: This article demonstrates the prevalence and possible uses for bacteria in today’s medical world. If bacteria could be used to produce proteins that create more precise gene editing with CRISPR, gene editing may have a very real future in human society. The way the researchers discovered new anti-CRISPR proteins is also a testament to the diversity of microbial life and how not all microbes can be cultured.

Critical analysis:  I find this article fascinating, because I am very interested in how cellular function, protein production and genetics can be used in the medical world to produce new treatments, drugs and cures for disease. With improved CRISPR technology, it may be more realistic to use gene editing to treat diseases such as cystic fibrosis. Unfortunately, this article was not very well written and did not explain the methods of the researchers in a way that is accessible to the public. The writing was very hard to follow and I had to read it multiple times before I began to understand the premise of the article. However, from my level of understanding there were no factual inaccuracies even though it oversimplified genetic editing and the way CRISPR works.

Question: How does the presence of anti-CRISPR genes in bacteria affect their susceptibility to antibiotics? Could they be more susceptible since anti-CRISPR proteins target bacteria’s “immune systems’? 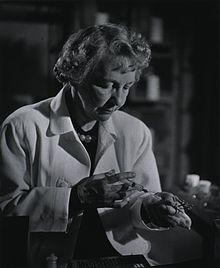 The aerobic gram-negative diplococcus bacteria  Branhamella catarrhalis or  Moraxella catarralis, is a pathogen of the upper respiratory tract,  middle ear, eye, central nervous system and joints in humans. It was originally thought to be a commensal strain of bacteria found in the throat and mouth, but starting in the late 1980s it was found to be the source of many cases of bronchitis, pneumonia, otitis media and sinusitis. Originally classified under the Branhamella  genus,  named after Sara E. Branham Matthews, it was moved to the Moraxella genus, named after Victor Morax, after several DNA hybridization and 16s rRNA studies justified its classification as a Moraxella bacteria.

Sara Elizabeth Branham Matthews  was a woman of great academic ambition. She was born in Oxford, Georgia in 1888 to a wealthy family who was ahead of their time in terms of women and higher education. Over the course of her life she received seven different academic degrees including a B.S. in chemistry and zoology, a Ph.D in bacteriology and a Medical Degree. She was also a member of many scientific boards and fellowships including the National Institutes of Health, the National Board of Medical Examiners, the American Board of Pathology and the American Academy of Microbiology. She has many accomplishments accredited to her name with one of her greatest achievements being the cure to spinal meningitis. Over her lifetime, she was published on 70 papers in professional journals and co-authored two books. She died in 1962 and is currently buried with her husband, Philip S. Matthews in the Oxford Historical Cemetery.

My name is Sage and this is my second year at UAF. I am an athlete on the UAF cross-country ski and running teams. I am really excited for this class, since microbiology research is something I am considering as a career. 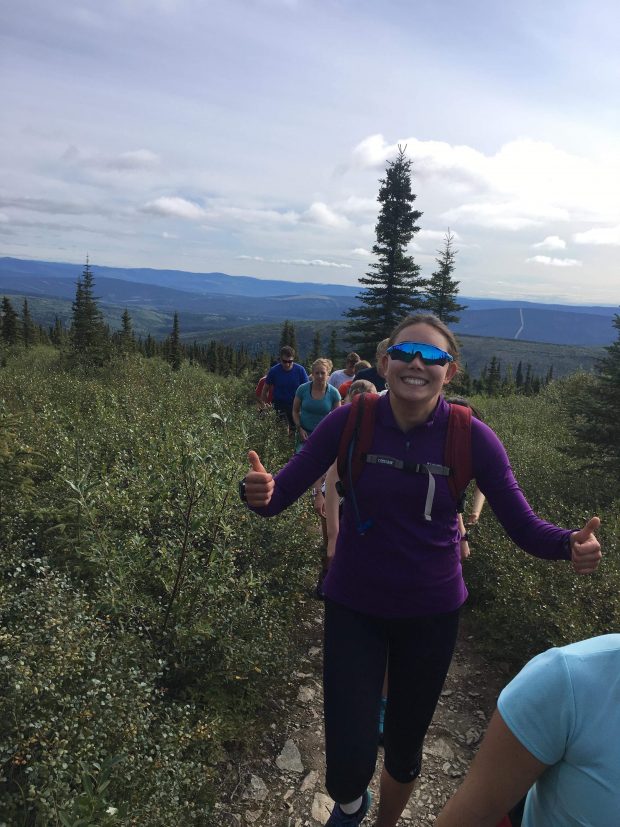 Photo: running with my team on Wickersham Dome during our annual pre-season camp in August.