It is quite a bit older than other papers, but this article talks about a 2016 review of the stromatolites found in Iceland.   These researchers, Allwood, Rosing, Flannery, Hurowitz, and Heirwegh, believe that the stromatolites could be not biological at all, but rather a natural geological process.

This is interesting because it could rewrite what we know about the early phases of life on earth. 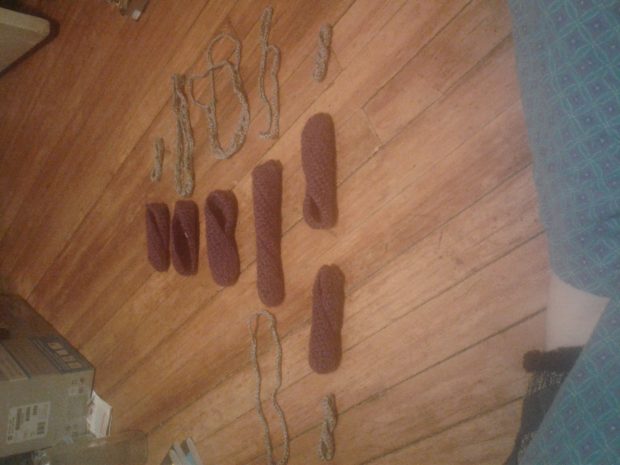 I can’t draw or paint, but I do enjoy crochet, so I wanted to try to do something with crochet for this project.

I wanted to attempt to crochet the cycle of cellular replication.

From left to right,1)   the initial cell with the DNA supercoiled, 2)the DNA unwound as the cell prepares for DNA replication, 3) theta replication, 4) the cell has successfully replicated and is now separating into 2 cells, 5&6) the two new daughter cells.

I tried to make cells two and three larger to show the cell growing.

This was done using acrylic yarn of two different colors.   The DNA id in a gray color, and the cells themselves are in a pink/purple color, almost like a badly decolorized Gram negative cell.

Biological characterization of  Pasteurella multocida  present in the Saiga population

P. multocida is a commensalist in human upper respiratory tracts.   from 2010 to 2015 there was a large mortality event among antelope in West Kazakhstan and Kosnstay.   They dies of hemorrhagic speticimia of a bacteria later identified through 16s ribosomal RNA sequencing as P. multocida.   These bacteria are stable commensals and opportunistic pathogens.

This paper was published two months ago, and I thought it was quite timely, considering it gives examples of both commensals and opportunistic pathogens.

I wonder how widespread some of these microbes can be?   These antelope had been followed for 40 years, and there was very little genetic diversity.   How can a microbe infect so many different forms of life and be the same, down to the subspecies. 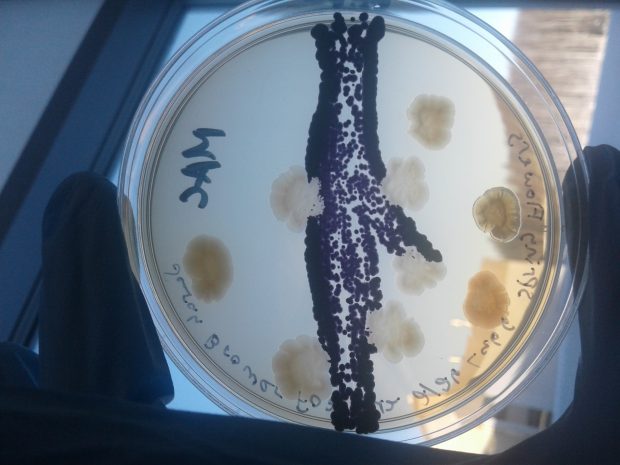 Spring (This is turned, the MAC should be on the top of the picture.)

I tried to make a cherry blossom tree branch using  Chromobacterium violaceum for the bark and  Serratia  marcescens for the flowers and petals.   Both of these microbes are fermenters, I wanted the petals to slowly leach out the pink of the MAC agar.

I wanted to give a bit of contrast with the petals and the background, so I chose the MAC agar for the color change and S. marcescens for that property and for the color of the bacteria.

“Why your kid’s strep throat keeps coming back,  A combination of genetic and immunological factors makes some children susceptible to the bacteria that cause strep throat” by the La Jolla Institute for Immunology, published 6 Feb   2018. Found:  https://www.sciencedaily.com/releases/2019/02/190206144503.htm

Streptococcus pyrogenes causes a number of diseases, but when found in the throat it is known as strep throat.   The scientist gathered 100 children who had undergone tonsillectomies and tested their immune response.   They had a less robust response to Strep.   Additionally, their parents also had a decreased reaction to the strep toxins released by the virus.

This, I think, connects to the class in the development of vaccines.

I think it is quite interesting how how we don’t really have a clear understanding on how the immune system responds to the removal of the tonsils, a thing we have been doing for nearly 2000 years.   It wasn’t really well written, I think because it was trying to water down a scientific publication.   It didn’t really give me as much information I wanted, but I imagine, that for a person with a less deep understanding of immune response as me, a person who, admittedly, doesn’t have a great grasp of the subject, would be able to get the gist.   However, the article could have been better organized.

“SpeA” is a toxin given off by the microbe, I wonder how the immune response acts on that, rather than the microbe itself.

Neisseria is a genus of bacteria, two of which can cause disease in humans.   These diseases are gonorrhea and meningitis.   The genus was first described in 1879, when Albert Neisser was working as a student.   Using oil immersion he identified diplococci, or two spheres stuck together, like a figure of eight, that he then cultured.   He was 24 when this happened, a.nd his name was given to the genus.   The specific genus Neisser cultured was  Neisseria gonorrhoeae, which comes from the Greek  gonos, which means “seed”, and  rhoe, or “flow”.   Gonorrhea produces a discharge, which is where the name comes from.   The leading physicians at the time believed that it was semen.

Neisser worked with syphilis after moving to Java in 1905.   Neisser is responsible for increased sanitation and preventive controls for sex workers ai the time.

My name is Sarah Brower.   I am a senior and an Anthropology/Physical Biology double major.

I hope this class goes well for everyone.

This is one of my favorite animals, the Wolverine. 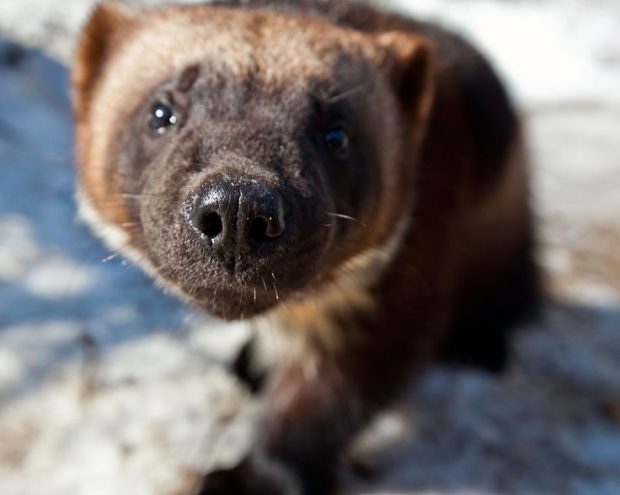