An investigation into the Shower Drain Microbiome 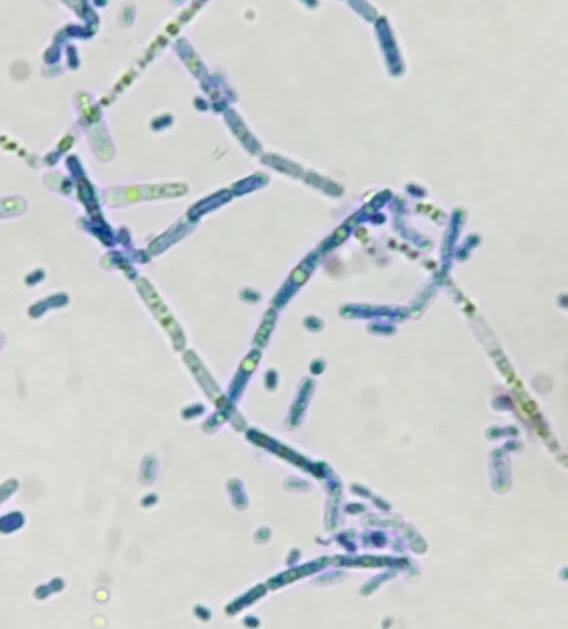 Researchers first compared the microbiota diversity between normally developing children and children diagnosed with autism spectrum disorder (ASD). They found that there was a significant difference in the diversity of the gut microbiome between these two groups. Next, with the help of the doctor who pioneered fecal transplants, children diagnosed with ASD were treated with fecal microbiota transplants (FMTs). They found that years after the treatment, there was a 45% decrease in chronic GI problems and a 58% reduction in the severity of ASD symptoms. 90% of the children in the study benefitted from this treatment plan.

Several diseases stem from problems in the human gut microbiome, however, we have not discussed the effects on the mind. The researchers mentioned that they want to do more research to determine what these microbes are and what chemicals they are producing in children diagnosed with ASD. This leads me to believe that these anaerobic microbes are using several different metabolic pathways that produce gut-distressing products, as well as chemicals that could have an abnormal mechanism of action in the brain. These pathways can either be anaerobic respiration, via using a different terminal electron acceptor than oxygen or engage in fermenting which can produce several different compounds.

I have a cousin who was diagnosed with ASD and I recognize how much of a struggle it is to both treat and manage his disease. This FMT treatment provides a somewhat universal approach to reducing the symptoms and GI trouble associated with ASD. I had also never realized or recognized, the mental effects the microbiome can have on humans. This article was definitely credible and scientifically accurate based on the researchers’ credentials and experience. The author also did an excellent job at explaining the motivation for this study, elucidating the microbiome, and finally conveying the results of the study and future directions. The article could be well understood by someone without a background in microbiology.

From Soil to Stem: A Succession Story 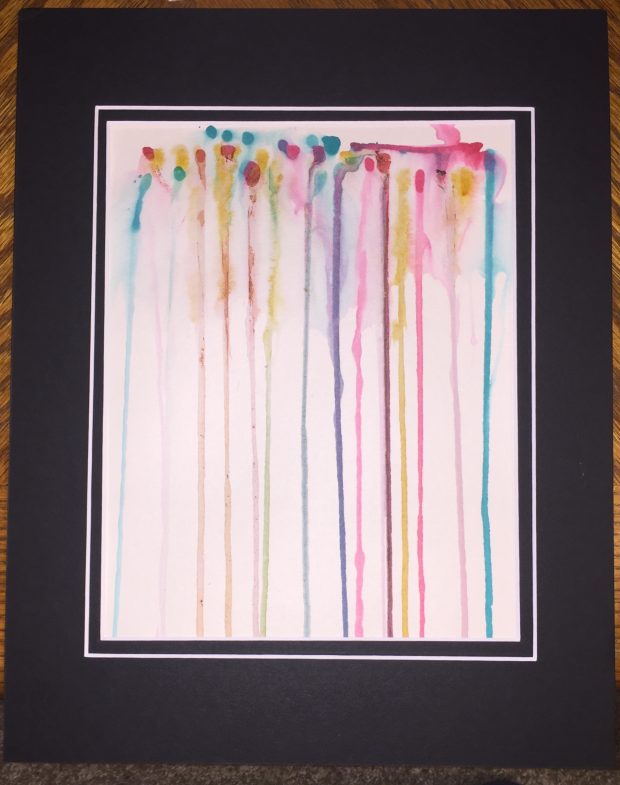 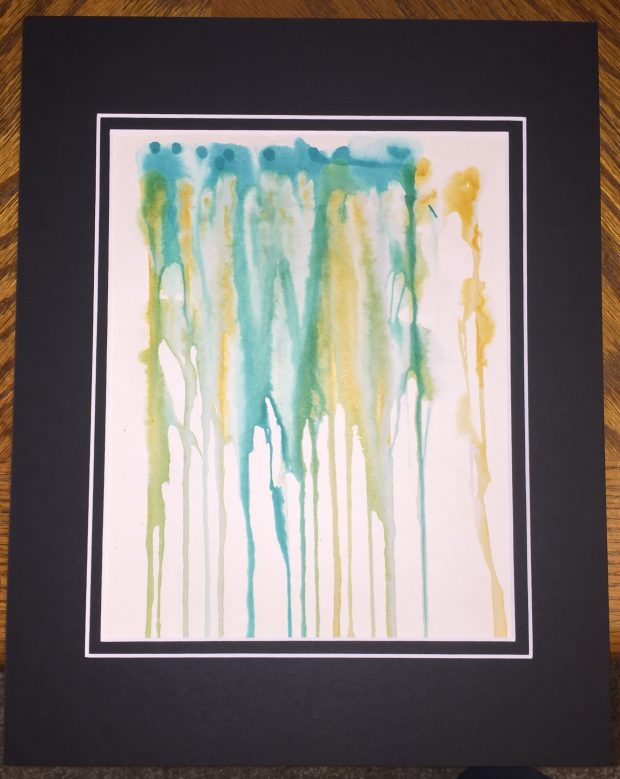 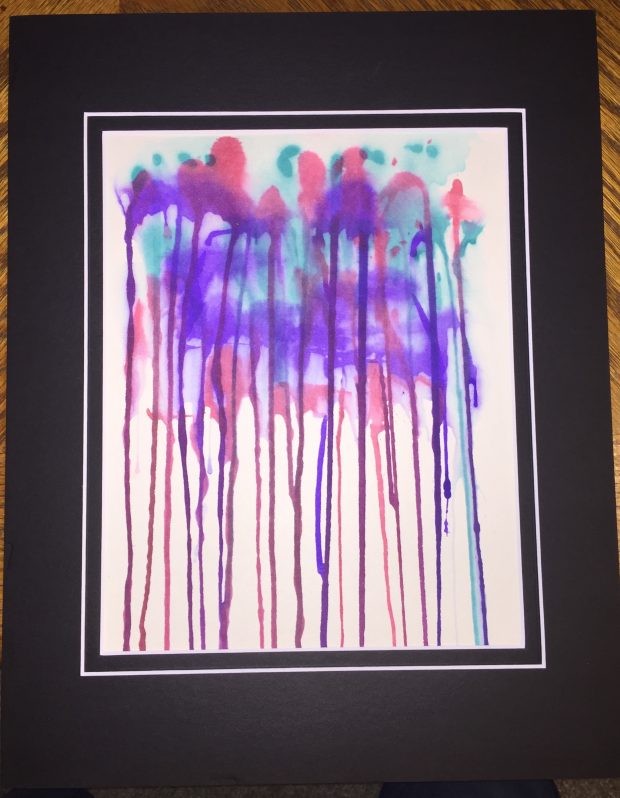 From Soil to Stem: A Succession Story depicts a forest undergoing the successional stages of reestablishing itself. Thanks to nutrient cycling and nitrogen-fixing microbes, this community was reestablished. The series runs left to right beginning with the presence of pioneer species and ending with the presence of a climax community. Without these microscopic, yet vital, organisms, landscapes of burnt trees and starving herbivores would still be littering our unique environments here in Alaska.

The artwork was made using microbial stains, watercolor paper, and black framing. Stains are used to view microbes under microscopes, however, these pieces highlight and reveal their enormous importance in supporting plant life. The trees are the stained organisms because they are the product of microbial efforts. Safranin, crystal violet, methylene blue, Gram’s Iodine, and malachite green were the stains I used. 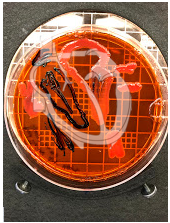 The artistic intent of the first image was to create a simple diagram of the human heart. Quite abstract, so the second photo has a diagram overlay to elucidate my artistic vision. My final piece is simply “UAF!.” I like it because of not only the simplicity but also the (somewhat) even consistency and ease of understanding what the art is portraying. A picture is worth 1,000 words, this one is worth 1,003.

“Bacteria develop tougher membranes to resist antibiotics, report into superbugs finds” by Sarah Newey from The Telegraph on Feb. 19th, 2019.

Summary: Using a nearly $1 million microscope, researchers at McMaster University in Canada found that as bacteria become more and more antibiotic-resistant, their membranes become tougher and more difficult to penetrate. Furthermore, these same bacteria had a less negative charge, which decreases the attraction between them and positively-charged antibiotics. With these deadly defenses in mind, the World Health Organization says that nearly 10 million people will die per year from these superbugs  in the year 2050. 10 million per year.

Connections:  We know that bacteria have extremely diverse physiologies and structures. Bacteria can be Gram + or Gram -, depending on the components of their cell wall. Below the wall is the cell membrane, which is relatively similar among most taxa. Understanding how certain antibiotics interact with cell walls and cell membranes of superbugs is a task that has yet to be solved, however, this study affords us a chance to hopefully make some progress.

Critical Analysis: I thought the article was well written and succinct. As someone who has some knwoledge about microbes, it was slightly misleading. It would have been nice to know how the cell membranes are becoming tougher or what molecules are contributing to antibiotic resistance. Furthermore, because this article is from Britain, I have some concerns whether when they say cell membrane, the author is referring to both the wall and the membrane, just the wall, or possibly just the membrane.

Scientifically speaking, the article was aimed at a general audience and lacked the scientific jargon that I was seeking. I wish it would have gone into more depth on the actual mechanisms or structures of these superbug membranes since that’s what the title conveys.

Question: The article explained that as bacteria become more antibiotic resistance, their membranes become tougher and more difficult to penetrate. How does this change the structure, composition, and function of the cell membrane?

Salmonella enterica was named after Dr. Daniel E Salmon (1850-1914), the very first doctor of veterinary medicine in the United States. While working for the Bureau of Animal Industry, Dr. Salmon’s colleague, Dr. Theobald Smith discovered a bacterial species while investigating hog cholera. Smith named the bacterial species Salmonella cholerasius (USDA). However, it was discovered later that this was not the cause of hog cholera, so the name was revised to Salmonella enterica in the 1980s, as suggested by Kaufman and Edwards in 1952 to avoid confusion (EuzÃ©by, 1999).

Dr. Salmon was born in Mount Olive, New Jersey in 1850. He attended Cornell University where he earned his bachelor’s in veterinary sciences, then his Doctor of Veterinary Medicine. He graduated in 1876 and was the first doctor of veterinary medicine in the United States. He opened his first clinic in 1876 but left a year later. In 1879, Dr. Salmon was devoted to eliminating contagious pleuropneumonia in cattle.

After his research on pleuropneumonia, Dr. Salmon was hired by the USDA to research infectious diseases, specifically cattle fever. Once the Bureau of Animal Industry was formed,  “Dr. Salmon built it to focus on research, pathology, and bacteriology’ (AVMA, 2013). Around this time, Dr. Smith discovered the bacterial species that would earn to name of Salmonella enterica (formerly cholerasius).

Finally, in 1905, “Salmon became the director of the National Veterinary School in Montevideo, Uruguay. He left the school in 1912 and died August 30, 1914’ from a pneumonia infection (USDA). Although only 64, he left a legacy that continues to inspire those who practice medicine today.

“The bacteria in your gut may reveal your true age”, by Emily Mullin from Sciencemag.org on Jan. 11th, 2019

—  Summary:  Researchers at Insilico Medicine  in Maryland are investigating what the microbiomes within our guts can tell us about our age and health. Using AI, correlations were made between reported ages and the frequencies of specific bacteria species within the gut. The algorithm formulated from these results was found to be accurate within four years of an individual’s true age.

—  Connections:  Microorganisms are everywhere, even within our bodies. Although some bacteria can be pathogenic, several species can be beneficial, like the ones in our colon. As mentioned in our textbook, “[t]he gut microbiome develops from birth, but it can change over time with the human host. The composition of the gut microbiome has major effects on GI function and human health”(2019).

—  Critical analysis:  A piece of information I found most fascinating in this article was the idea that the bacteria in our colon not only could provide details  on our age, but also our health. The prevalence or lack of certain bacteria could explain the rate at which our gut is aging, as well as “whether things like alcohol, antibiotics, probiotics, or diet have any effect on longevity” (Bullin, 2019).   Furthermore, the researchers  mentioned that association studies could show changes  in bacteria  frequencies  within the colon due to certain diseases, drugs, and other substances.

I believe that article was scientifically accurate. The source of the bacteria (I assume fecal matter) came from over 1,000 individuals around the world, but sampling biases could always be present. It would have been informative to provide a link to the scientific  paper to ensure the validity of sampling and statistical testing.

I also believe that the author did an excellent job introducing her readers to the subject with the first paragraph and then began describing the main idea with non-jargon language. The author was also able to connect this finding with the ideas from several others (i.e. biomarkers, biological aging estimators).

—  Question:  If one’s colon health and age can be predicted by the frequencies of certain bacteria using AI, could medications replenish the bacteria populations to prevent colon aging, which could allow aging individuals to absorb more nutrients from their diet and decrease their risks of ulcerative colitis and other GI diseases.

Hi, my name is Reed Thomas and I’m currently a freshman pursuing a BS in Biological Sciences.  I plan on using my degree to apply to medical school and, hopefully, come back to practice in Fairbanks.

I am Lathrop High School graduate from Fairbanks but enjoy traveling throughout the states. I have been to several interesting places, but most notably was Italy and San Marino where I played soccer for several weeks. In my free time, I enjoy playing soccer, watching soccer, and coaching it too! I look  forward to a fun semester. 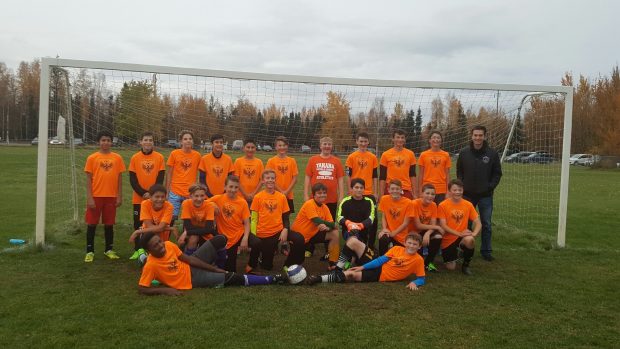