This article from Scientific American discusses multiple resent studies into the development of the immune system in infants. The first study discussed compared the immune responses of newborns that were born premature vs. full term. The study found very little difference between the two. A second, more broad study compared the imune systems of thousands of newborns from around the world, and also found very little variation. Scientists are now using the information from both studies to formulate a more clear baseline of what a healthy newborn immune system should look like.

In class we discussed the elements of the immune system, as well as how infacts are colonized at birth with microbial life. This article drew connects between these two things. It concluded that because most newborns all go through the same rapid colonization, their immune systems also evolve in the same way.

This article was interesting because I would not expect the ammount of similarity they found to be present. Also, I never considered that premature babies could have different immune systems. This article was clearly written for the general public. It summarized and cited multiple primary studies and included quotes from the people that wrote them.

Now that we know that all our immune systems are basically the same at birth, will we be able to determine a specific age when they start to varry?

For my microbial art project I decided to take advantage of the late spring snow we were blessed with. I attempted to sculpt a bacteriaphage out of snow and then color is using a spray bottle of food dye. Originally, I wanted to try and make multiple bacteria with different features, but they kind off just looked like piles of snow.  The bacteriaphage seemed like the most recognizable and unique shape to make. I also tried to color it in a way that showed the different structures present. I made the tail blue, the capsid head red, and tried to add some green DNA in also. The sculture is in the feild next to the museum if anyone wants to gain an in person appreciation. 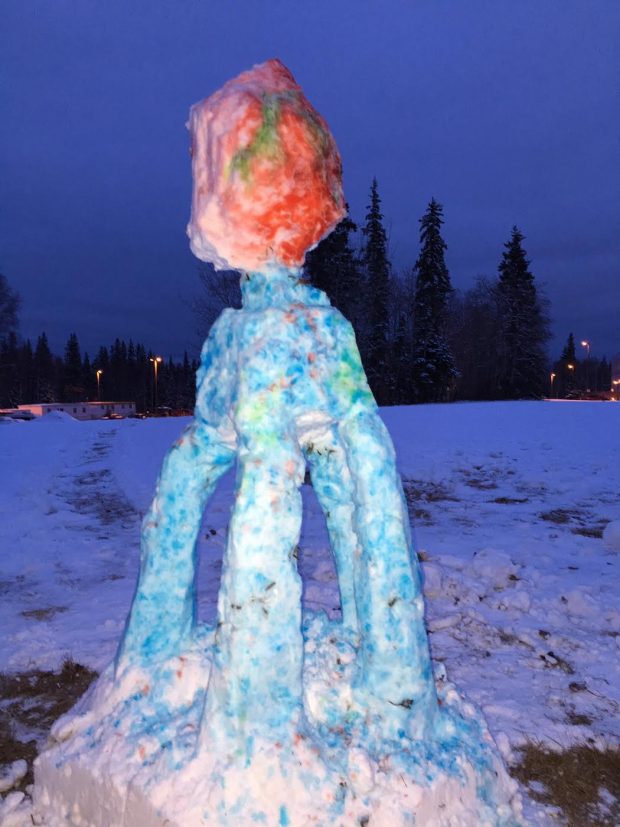 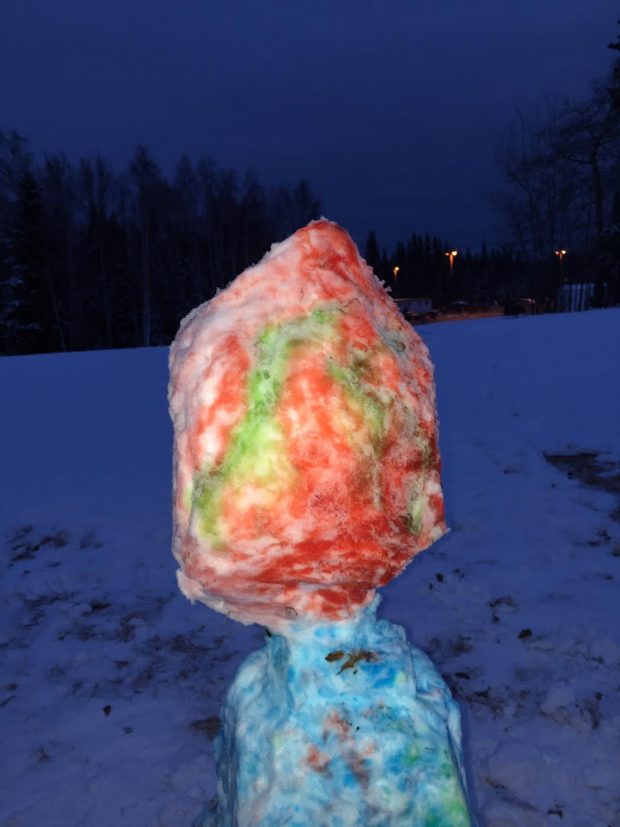 A new study by the University of Colorado Boulder sampled thousands of frogs across the world and looked at all of the microbes growing on their skin. They found that frogs living in warmer locations had much less diverse skin microbioms than those that lived in cooler climates. While we hav’nt talked about the microbioms of frogs we have recently discussed the microbiom on human skin, as well as the different factors that may efffect it.  I found this article interesting because I went against what I expected. I assumed that colder temeratures would be a limiting factor on bacterial growth so a warm climate would allow for more diversity. The researchers believe that a cooler climate slowed the growth of bacterial species and allowed many differnet species to take hold. Im warmer areas one fast growing species may be able to quickly out compete others, creating a less diverse community. While this is an extremely new study it seemed reliable. The research was preformed across a large time period and in many differnet areas on many differnt species of frogs. In addition, I found the article to be well written. The author connected the study to recent issues of mass frog die offs due to fungal skin infections. That gave a logical reason of why the University of Colorado would do such a massive study on the frog microbiome. I wonder how much of a temerature change a certain species of frog would have to experience before their microbiome was altered, and if this is already happening due to climate change. 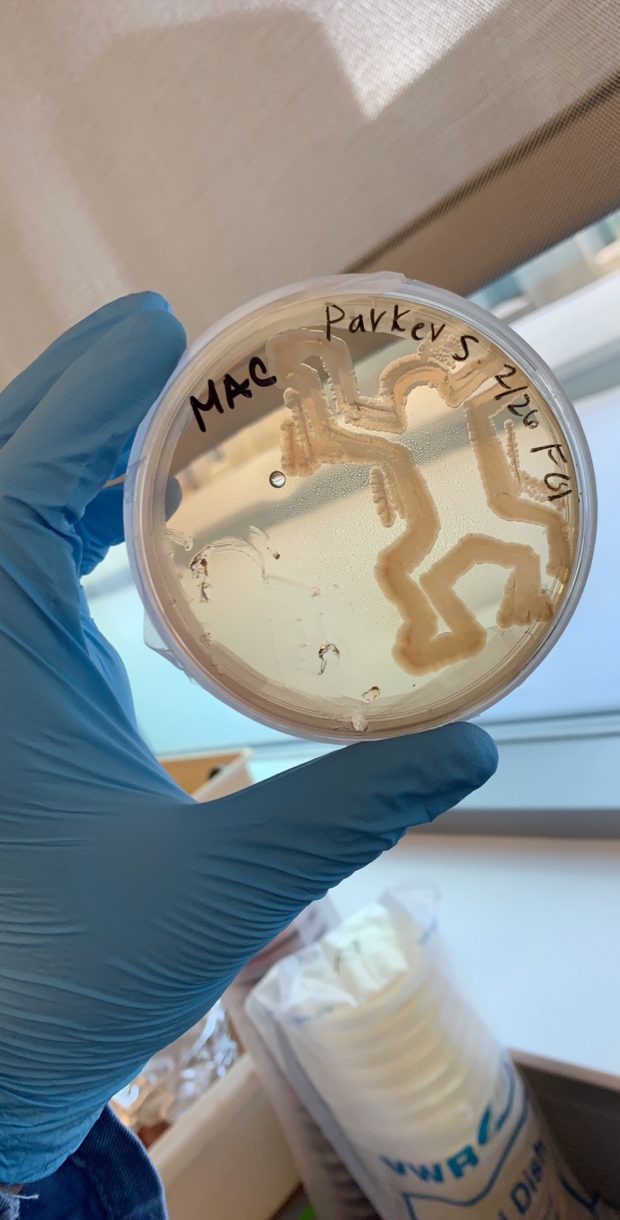 For my microbial art I attempted to draw a couple of people dancing in a style simlar to artist Keith Haring. For some reason only one of the figures really showed up, despite the fact that both were drawn with the same bacteria. I used the S. marcesens   on the MacConkey agar. MAC is a differntial and selective media that selects for Gram negative bacertia and allows one to determine weather a microbe is capable of fermenting lactose. A lactose fermenter would have turned the colonies  pink which would have looked a lot cooler probably. I’m not sure why I didn’t choose E. Coli for example. S. marcesens does not ferment lactose. Instead it grew on the peptone present in the media and produced much lighter colored colonies.

How plant microbes could feed the world and save endangered species

Summary- Recently scientists have begun to study the micro biomes of different plants and how they relate to disease resistance. Certain crops such as Cacao are threatened buy fungal diseases, however they appear to be more resistant when diverse microbial colonies are also present on their leafs. This strategy of protecting plants could be applied to many other crops that are threatened by fungal diseases.

connection- We’ve talked in class about the diversity of  microbial life as well as how bacteria and fungus like penicillin interact.

Critical analysis- This story was very interesting to me because it addressed the important issue of food security for the future. The article mentioned the growing global food demand and how new practices must be adopted in order to maximize crop yield. While I knew about the microbiom within and on humans I had never really thought about how that concept would apply to plants and how they would probably have their on microbioms as well. This story also raised many concerns for me about the state off industrial farming such as the amount of toxic fertilizers and lack of genetic diversity present in many of our crops. Overall this article seemed fact based and reliable due to the research that was cited. The article was written in a way that most people should understand while still including the important research.

Question- While a lot of this information was knew to me, it seems like we should have known this stuff for a while. Yet, I believe that this research is still not applied to many farms on a wide scale. Why is that? Are we just to lazy or has it not become cost effective yet?

Paul Ehrlich was a German microbiologist born in 1854. He is the namesake of 5 species of bacteria within the genus Ehrlicia. Bacteria of genus Ehrlichia are categorized as small, ellipsoidal and Gram negative. In nature Ehrlichia cycle between ticks and various mammals, resulting in ehrlichosis when observed in humans. Ehrlich is best know for his work in developing staining methods while working at the Berlin Medical Clinic. Later, Ehrlich went on to work as an assistant to Robert Koch at the Institute for Infectious Disease and began his immunological studies. In 1908 Ehrlich won a Nobel prize for his work in immunology as well as his work with chemotherapy.  Ehrlich eventually died of a stroke in 1915 at the age of 61.

Ehrlichia chaffeenis  and ewingii are the only two species of Ehrlichia known to infect humans with  chaffeenis  being the most common. The species name of  chaffeenis is derived from Fort Chaffee in Arkansas where the species was first discovered.

The Nobel Prize in Physiology or Medicine 1908.’ Nobelprize.org, www.nobelprize.org/prizes/medicine/1908/ehrlich/biographical/.

Hi my name is Parker Stone, and I am currently in my second year at UAF pursuing a degree in biology. I was born and raised in Anchorage. The picture is my coworker and me working for Fish and Game at 3am in Bristol Bay. 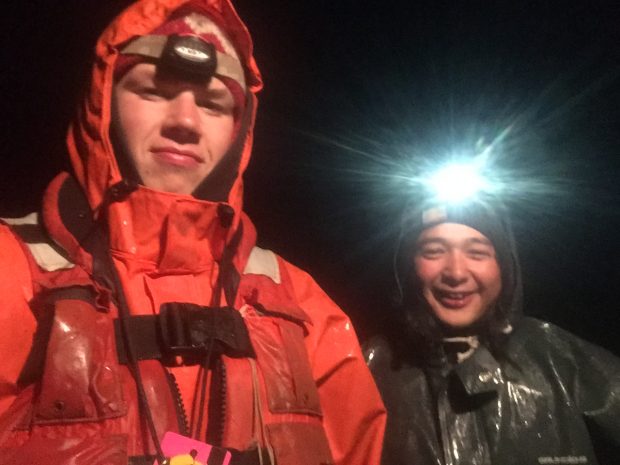