Description:  This paper contains research on what goes into isolating and understand a bacterium that was swabbed from a dog’s mouth. The results showed that the genus of this bacterium is Dietzia  and through research some of the Dietzia species could be pathogenic. 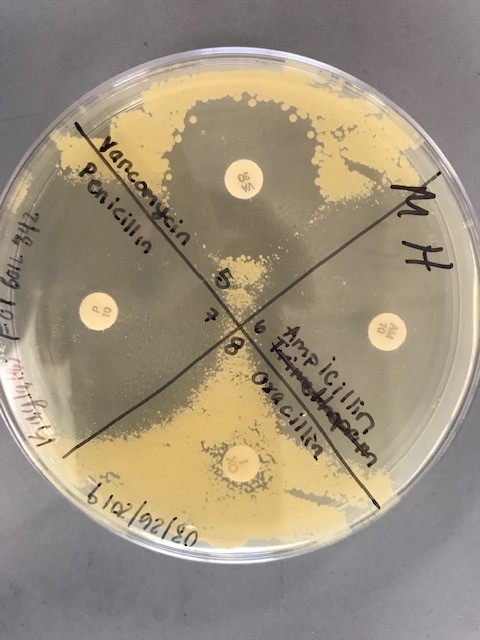 Researchers design bacteria to gobble up antibiotics in the environment, before microbes have a chance to turn deadly. 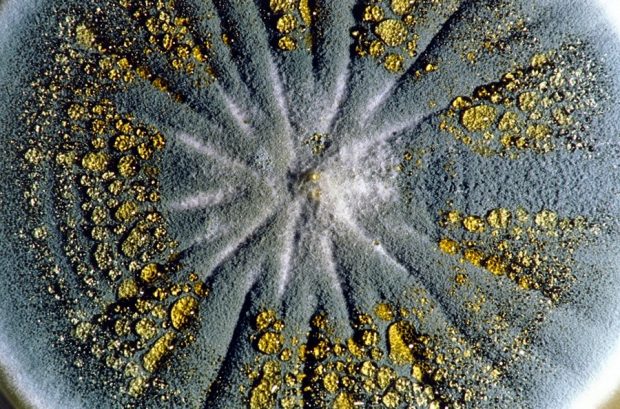 Summary: Antibiotic resistance has been around for a long time; it has even existed in nature long before humans contributed more antibiotic resistant bacteria. In the year 2007, a postdoctoral researcher in the Harvard University lab of George Church named Gautam Dantas researched the bacteria that are capable of consuming and using antibiotics as a nutrition source. It was found that bacteria evolved to resist beta-lactam which is supposed to weaken their cell walls but by producing an enzyme that breaks the ringlike part if the molecular structure when it is exposed to penicillin. There is still a lot more for scientists to learn about why bacteria engage in the behavior of eating substance that are meant to kill them.

Connections: When it comes to penicillin, we learned that it also targets the peptidoglycan in bacteria cell walls, it binds to microbial tanspeptidase enzyme so it can’t cross-link peptidoglycan. We also learned in class when taking about penicillin that it will not kill Archaea because they don’t have peptidoglycan. There is also a huge problem with over prescribing antibiotics in humans and livestock that is contributing to the more antibiotic resistant bacteria that are out there.

Critical analysis: What I found interesting is that some bacteria have evolved in a way that certain antibiotics that are made to kill them, becomes a nutrition source for them. It is amazing how this can come about but it is also quite concerning because it might be even harder to find other alternative medicine in the future. However, with the increasing amount of inavation in technology, like whole genome sequencing can help with this huge problem that is still on going.

Question: What kind of other ways in the future that could help with the problem of antibiotic resistant bacteria?

For my art project, I painted using acrylic paint on mixed media paper of a landscape that represents early earth when microbes were the only living organisms that thrived in the toxic atmosphere. Today there are ancient and modern stromatolites, in my painting it represents the older known stromatolites. These “rock layers” are formed by certain kinds of microbial mats that have carbonate and silicate minerals to help promote fossilization. This is the reason why there are still some ancient stromatolites around but they were more common and diverse about 2.8 to 1 billion years ago. Bacteria like, Cyanobacteria that are aerobic photoautotrophs and green non-sulfur Chloroflexus that are photoheterotroph played a very big role in the formation of these microbial mats. Overall, without microbes we would not be here today, especially the ones that helped oxygenate our atmosphere. 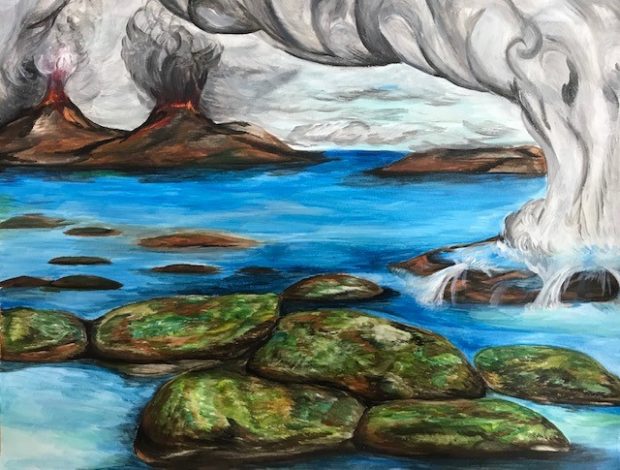 New technique pinpoints milestones in the evolution of bacteria

Summary: The evolution of bacteria can be studied through preserved fossils that leave behind physical evidence of their evolution. However, there us new technique that MIT scientists that is a reliable way to determine specific groups of bacteria that appeared in the evolutionary record. This technique can also help rival details of changes that may have occurred. The break through was discovering that tracing certain genes like the gene that codes for production of chitinase in bacteria can give a bigger insight into how certain bacteria evolved.

Connections: As the article states that preserved fossils are an important resource to have in learning the evolution of bacteria and we also learned in class about how bacteria are preserved over time. In class we learned that fossilized microbial formations are called stromatolites that can be found in rocks that are 3.5 billion years old. They are formed when certain microbial mats that deposition minerals that promote fossilization.

Critical analysis: What I found interesting about this article was that the researchers were able to trace the chitinase in fungi which most resembled the gene when it first appeared in bacteria and reasoned that that must have been when fungi transferred the gene to bacteria. I think this article did a good job at explaining something that can be confusing for people that aren’t involved with science could possibly understand the general concept of the research they have done.

Question: Would be there be any other was to determine how a bacterium evolved and obtain traits that helped them survive?

My intent was to paint something that represents the the tree of life. This makes me think about how if there wasn’t microbes that oxygenated the earth we wouldn’t be here.

There was some results that was I thought would turn out but some that I wasn’t expecting. I wasn’t to surprised with the MAC plate because I used Chromobacterium violaceum in order to get the dark purple color for the out line of the tree. For the flowers/leaves on the tree I used Serraita marcescens that turn out pink as I expected. However, the TSA plate is what was really interesting there appears to be a green-yellow color where the grass after putting streaks of Escherichia coli in that area.  The EMB plate did exactly what the lab hand out said was that when using Escherichia coli  it strongly ferment lactose acidify, turning into a black with a green metallic sheen. 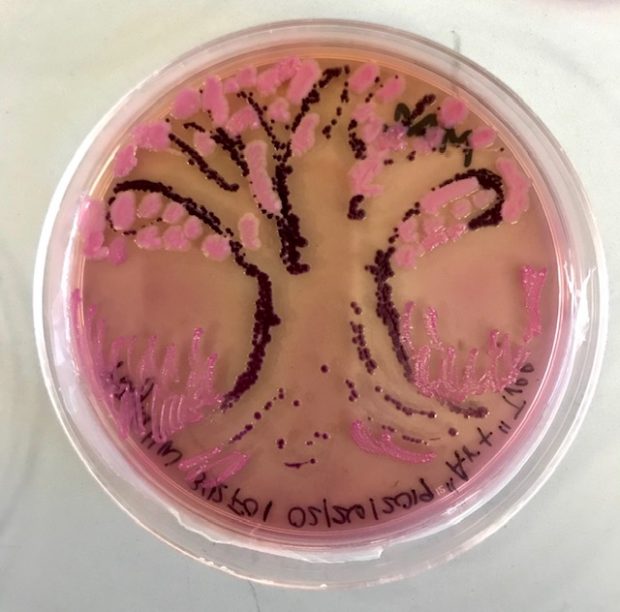 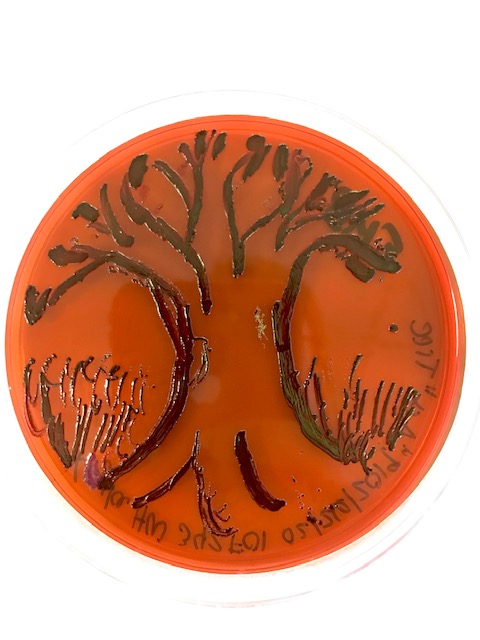 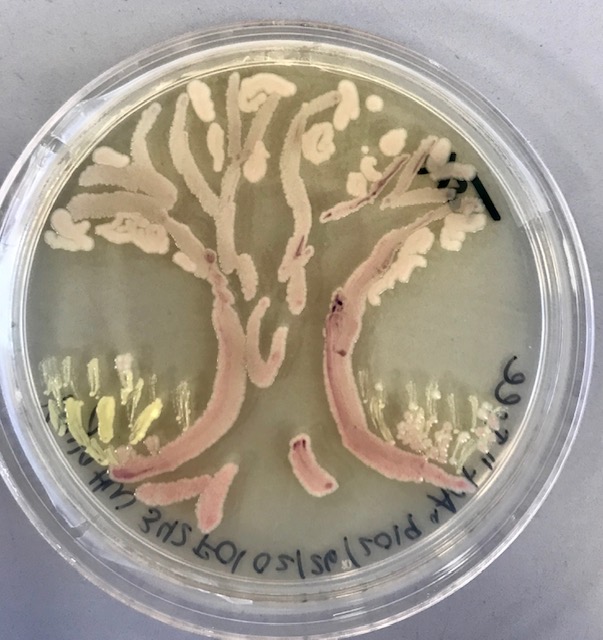 Connections: Methane producing archaea (methanogens) are autotrophs because their main source of carbon for growth is CO2. They also thrive in hypoxic conditions meaning they thrive in low oxygen.

Critical analysis: One part in the article that I found interesting was a microbiologist William Whitman at University of Georgia was one of the researchers in the beginning that was able to hypothesis that halophilic (organims that thrive in high salt concentrations) archaea evolved from linkage of methanogens but there was a missing link. Until microbial ecologist Dimity Sorokin and his colleagues found DNA within the soda lakes in Southern Siberia that revealed two versions of unique genes to methanogens confirming that hypothesis. The other aspect that was helpful was researchers were able to successfully culture these archaea, making it better to study and apply experiments to the different strains that were found.

Question: How would you go about looking for versions of unique genes within a methanogen, would you compare it to a similar archaea? 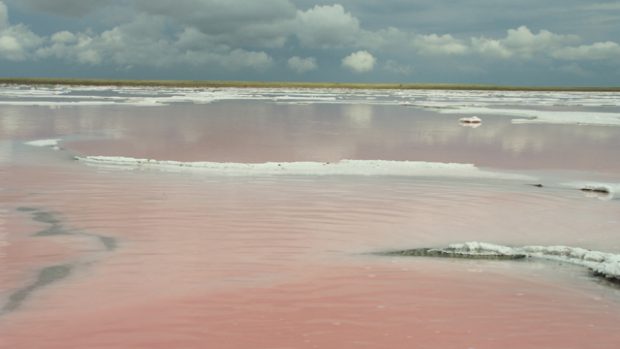 Pasteuria ramosa is a gram-positive, endospore-forming bacterium that is a pathogen that can only grow inside a host. P. ramosa is a bacterial parasite of the cladocerans Daphnia pulex and D. magna (Sayre et al., 1977). Transmission from host to host is within the endospore stage where those spores attaches to the antennae of Daphnia. This species of Pasteuria is named after Louis Pasteur who was born in Dole France 1822 and later to become educated with a doctorate in 1847. Pasteur begin with studying fermentation and pasteurization, which led to starting the Germ theory that adopted a related view on the cause of diseases. He didn’t fully start engaging in studies of disease until 1870’s, Pasteur began expanding on the knowledge of anthrax and eventually help produces a vaccine. Pasteur’s career shows that he was a great experimenter, less into with the theory of disease and immune response than with dealing directly with diseases by helping to create new vaccines.

Hi everyone! My name is Kayla Haines-Wells and I am currently on my 4th year of working towards my B.S. degree in Biology. I was raised in Southern California where I spent most of my childhood spending time with my horses (the horse that I am riding in the picture is named Daisy, who I owned for 6 years before going to college). One thing that I love about being at UAF is that I have the coolest job at the  Museum of the North in the mammals lab. The subject that fascinates me about microbiology is how billions of protozoa and bacteria help with fermentation for digestion in ruminant species and even non-ruminant species. 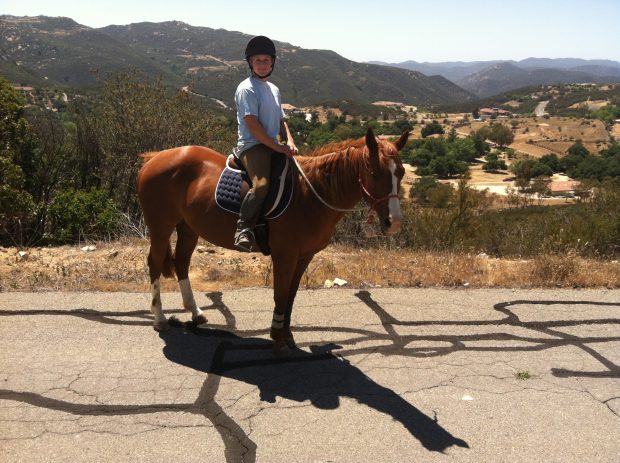