What might be in your water holding tank?? In this paper, I talk about what two bacterial species I found in my water holding tank. Our water is hauled by Water Wagon, and we rent, so we have no idea when the last time our tank/lines was cleaned!

The project initiative actually began because I was curious which method of dish washing proved to be “cleaner.” Below is a picture of my first TSA plate where you can see dishes washed in dish water have MUCH more colonies than dishes washed with soap and then rinsed. 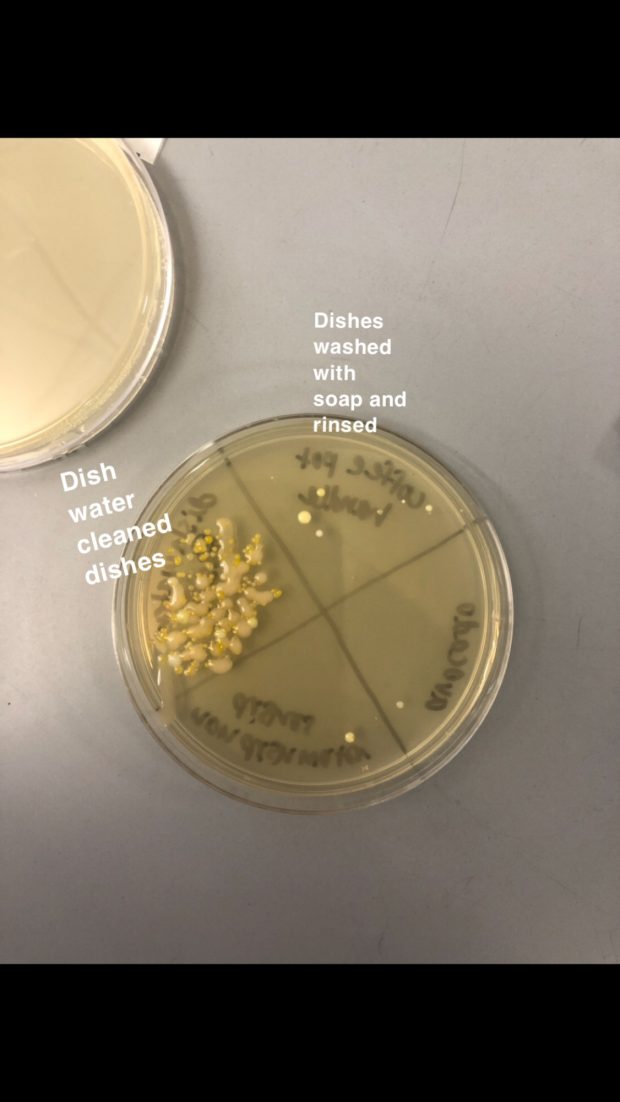 If you have kept up with my “microbes in the news” posts, you’ll probably notice a theme at this point. I’m very interested in the gut microbiome. I think this is largely just because I’m a health geek and strive to fuel my body as efficiently as possible. But with that said, also how junk food and preservatives affect the gut biome, because trust me, I still get my fair share.

The study began out of interest for the increased number of those with food allergies, obesity, and metabolic disorders. Trying to understand what in our environment is causing this was the driver for the study. The article talks about how there is a correlation between gut microbe disturbance and consumption of common preservatives. The study showed that the gut microbes are killed or inhibited after inoculated with common preservatives in the same concentration regarded as safe by the FDA.

Connections: This is exactly what we learned about when talking of the human microbiome.

Critical analysis: Being that this study came from a university, I feel it is fairly dependable. This article seems to have been published before the publication of a primary literature paper, but otherwise interesting to know the correlations.   I also feel the article did a good job of giving the information to the public, as it did not draw any conclusions.

Question: Can we expect to gut microbes to evolve to process preservatives?

I intended to make Bacteriophage earrings made from Amethyst quartz and glass seed beads. Initially, I had intended to make pink and violet earrings representative of Gram staining, but came across the Amethyst bead that reminded me of the icosahedral head bacteriophages have. I couldn’t quite capture it in the picture, but the Amethyst has some white string-like dimensions to it, which I used as an interpretation for the phage “DNA” housed in the phage head. The clear crystal bead is representative of the tail, and the gold bead representative of the tail pins. The black beads at the base of the tail fibers weren’t mean to represent any phage anatomy, but instead meant to give the fibers a more phage-like structure.

Gut Microbes and Gluten: Your Bacteria Might Be Gluten-Sensitive

Gut Microbes and Gluten: Your Bacteria Might Be Gluten-Sensitive

Fundamentally, gluten sensitivity is a result of biochemistry. Gluten is less able to be broken down by enzymes that typically process proteins. Gluten is also more apt to binding to immune cells and this triggers an immune response and inflammation. Food sensitivities are an act of an immune response, because it seen as a pathogen essentially, and studies show the immune system is impacted by the microbiome. Other studies show that those with gluten sensitivities have several differences in their gut microbiome, an increased number of harmful bacteria, and a decreased number of harmless bacteria.

This is related to what we were just learning about the human GI tract having at least 16,000 species of microbes.

I found it really interesting that vaginal births are the first exposure babies have to microbes, yet logical. Also that there are distinct differences between babies born vaginally and via c-section that is carried even later in life. I thought this article was very informative and easy to read. From my knowledge thus far, I didn’t read any information in this article that made me skeptical of its credibility. Therefore, I do think it did a good job of communicating the science to the public. 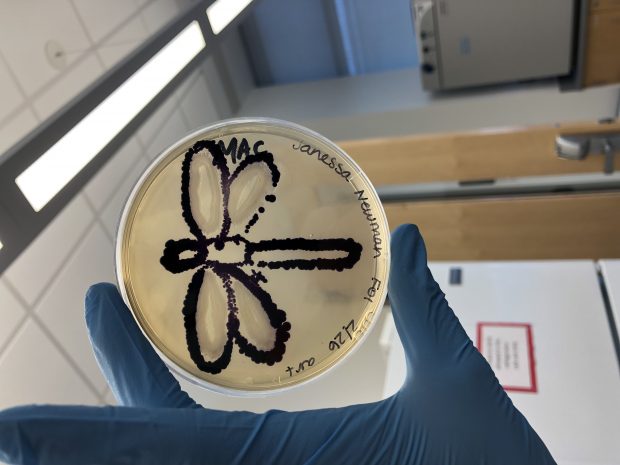 I had intended for the wings to have a lining of red, but I must have made a mistake and picked the microbe that developed a yellow appearance because it also appeared yellow in my TSA plate.

As you can see, I chose the MAC plate to display my art. The MAC plate is a differential and selective medium that selects against gram positive bacteria. For that reason I chose all gram negative microbes. MAC contains a pH dependent red dye and lactose and peptone as carbon sources. Microbes that feed on the lactose and produce acidic lactose would change the agar to pink, and microbes that feed on peptone convert it to ammonia; this is why my MAC plate turned a lighter yellow color.

Title: Gut bacteria may offer a treatment for autism

The article elaborates on a study done using mice with autism genes to see what affects Lactobacillus reuteri (a gut flora bacterium normally found at low concentrations in people who have autism) had on their autistic behaviors. To do this, the researchers compared mice drinking water laced with L. reuteri to other autistic mice who were not drinking laced water (control). They found that L. reuteri laced water “abolished’ some autistic characteristics, whereas the control mice saw no change. They believe that L. reuteri interacts with oxytocin, a hormone that plays a part in the forming of bonds in human and mammals. To test this, researchers used autistic mice that also had a gene mutation that turned of oxytocin receptors; L. reuteri laced drinking water had no effect.

I think this article is related to early thinkers of disease that we learned about at the beginning of the semester. We like to think we’ve made tons of huge discoveries, but now we’re able to draw connections between microbes and sicknesses more efficiently, but more astoundingly, even intellectual anomalies.

Personally, I am really interested in the gut microflora and its unknown capabilities, so I enjoyed this article. I do think the article was factual, but what I found to be absolutely cringeworthy was that the article continued to say L. reuteri “abolished’ autistic behaviors. In my opinion, it’s hard to say abolished in general, but especially when the sample size of this study was only a few dozen mice, including the control mice. I do think that the article was written fairly well, though some parts did go into depths that the general public may not understand or care for. I think the article also did a good job of explaining that we may not see the same results in humans and it could be strain specific.

Because I think this is enough information for people to jump the gun and do their own personal trials, I’d be curious what other effects L. reuteri might have and in what sources might we find it?

Belnapia  rosea  is named after American microbiologist, Jayne Belnap, and  rosea,  after the pink-rosey colonies the bacterium grows on agar. Belnap received her undergraduate degrees, Biology and Natural History, at the University of California, Santa Cruz, her Masters of Science, Ecology Department at Stanford, and her PhD, Botany and Range Department, from Brigham Young University. Belnap had a strong interest for the ecology of ground soils, specifically, how land can be managed sustainably, while still being used for recreational uses like grazing, energy exploration, and development. Balnap has been with the Department of the Interior since 1987 and travels around the world to train land managers the best practices for dryland ecosystems.

My name is Janessa Newman and I am a senior Biology student. I am interested in applying for Physician Assistant school in the future, so Microbiology is a prerequisite for that, but also an interest of mine! I really enjoyed Cell and Molecular Biology so it’ll be interesting to build from that information.