My paper and bacterial isolation looked at what bacteria is usually found on sports equipment, what I discovered on mine, and why it’s no need to be worried that what I found isn’t what I was expecting! 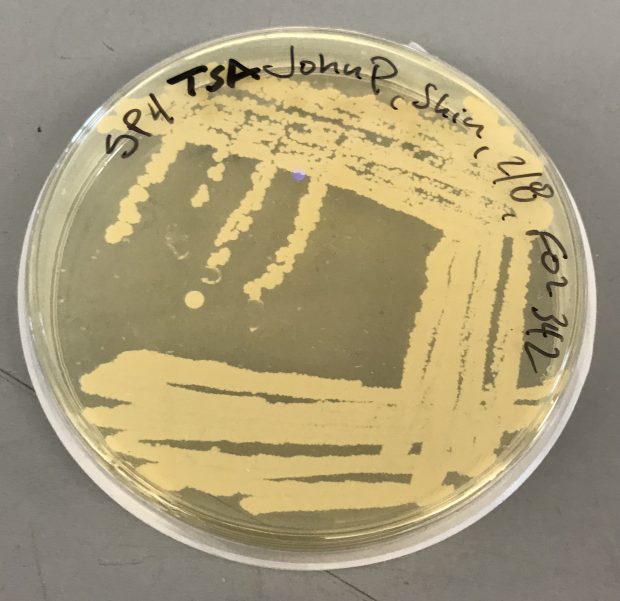 Here is an image of my bacteria isolated on a TSA plate! 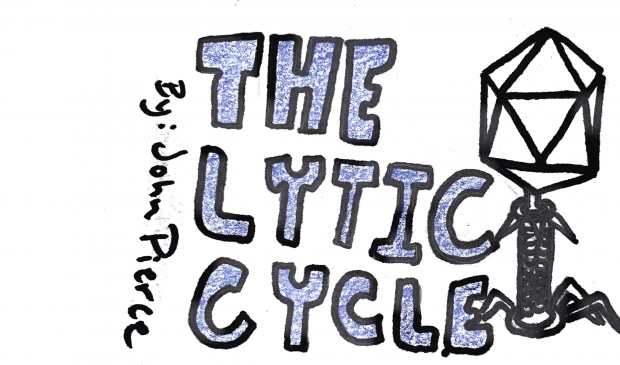 For my art project I created a flip book of the Lytic cycle. A process that we learned about in class that T4 bacteriophages carry out via a transduction process. I’ve added the GIF version and the link to a flip thru loaded on youtube!

Summary:  This article is a review done on some recent research in the world of Microbiology, looking at a mechanism utilized by microbes when they are nutrient limited. Using electron microscopy a group of scientists from the Imperial College of London analyzed flagella on two species of Gammaproteobacteria under nutrient limited conditions. They determined that when there is a lack of nutrients these bacteria can enter a lower energy state to conserve energy by ‘ejecting’ or ridding themselves of their flagella that normally use lots of energy.

Connections:  We’ve learned about both structures bacteria have that helps them move around, which include flagella (the focus of the study). Plus how bacteria can conserve or use energy, which is the key reason for this mechanism being used in bacteria.

Critical analysis:  I found it interesting how bacteria can adapt so efficiently to conserve energy when exposed to nutrient limited environments. I was unaware they could eject or get rid of their energy expensive flagella. I believe this paper was scientifically accurate as it was written as a direct review of a scientific paper on the topic. Effectively taking what would be a dense, hard to read for the general public, lab report and turning it into an easy to understand article that highlights the key points of the research.

Question:  What other structures or energy expensive mechanisms could bacteria limit or get rid of in nutrient limited environments?

Title:  Are viruses the best weapon for fighting superbugs?

Connections: We have recently been covering viruses in class and learning about how they operate to infect bacteria which directly relates to this article.

Critical analysis:  I found this article interesting because it helps highlight how phages (or viruses) can be really useful moving forward. The word virus is almost always used with a negative connotation but it is important to realize it can be helpful. I believe the article holds a semblance of accuracy because the author is in fact someone who is a specialist in infectious disease, and highlights the pros with the cons providing an argument from all sides which is important. Also it is simple enough in the jargon that it can be an article shown to the general public and still convey its general message, and stir interest in phage use for medical treatment which I think is the overall goal of an article such as this.

Question:  Do you think people would ever be able to accept using a phage to kill bacteria in their body? Would you be able to? 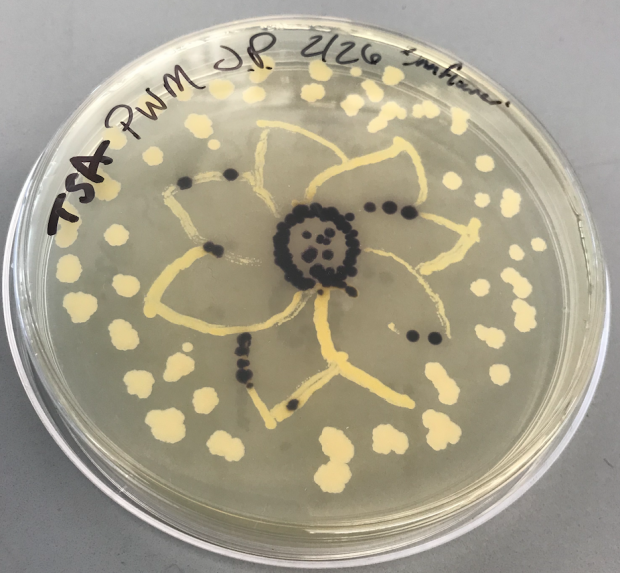 I intended to use various bacteria to create a sunflower. Using C. violeceum as the center, dark middle. M. luteus as the yellow petals, and adding a surrounding of bacterial spots using my very own isolate! I didn’t intend to streak the middle into the petals but the little that did happen I think adds to it! My best picture came out on the TSA plate which isn’t differential.

Summary:  This is a small article that nicely states some findings from a project called the Flemish Gut Flora project. The results seem to conclude that two types of bacteria, in the gut are depleted in people who suffer from depression the bacteria, Coprococcus and Dialister, were found to be two of the main bacteria that were missing in those with depression. The article states if the results are further confirmed (as this is one of the first major studies and findings of its kind) it could lead to a plethora of information about the gut-brain connection and further provide new solutions for mental illness. Concluding this article are a few different statements from different scientists, both involved in the study and not, on its importance as being the first step in discovering the major role the microbiome plays in health and disease.

Connections:  This article connects very closely to what we’ve been talking about in class in the sense that an argument could be made for microbes ruling the world. If this study is further confirmed it would be a stepping stone to realizing that almost all of the problems people have are on a microbe level. Every decision people make, that changes the world, is influenced by their mental clarity and how they are feeling. Therefore, I would say microbes do rule the world, as they influence every aspect of the people, animals, plants and everything that make up the world.

Critical Analysis: I found this article interesting because of the implications it was hinting towards. Saying that this was the first real stab at understanding a huge unknown microbiome and that it could be a tool to cure mental illness. I had heard this theory of the gut biome having more of an influence on the entire body before, but it was very interesting to see an article talking about a large scale study that had been done. I believe the story was accurate scientifically, it was a smaller article, but all the information on the study and the results can be found quite easily. It was written in a fairly easy to read way, where anyone in the general public could understand the general idea that the gut biome plays a role in depression. So I think it does a good job communicating science to the public, however I will say it definitely is trying to paint a much bigger picture for people to grasp on. While this research was a big project, it is one of the first and much more needs to be learned about the gut biome before one can truly say a link for depression is only these two gut bacteria.

Question: Do you think one-day, microbial gut ‘supplements’ could be a viable cure to mental illness or other disease?

Wigglesworthia glossinidia was discovered by Sir Vincent Brian Wigglesworth, a British scientist who studied entomology (study of insects), in the gut of the tsetse fly. The gram-negative bacteria are classified in the Wigglesworthia  genus for its discoverer, and  glossinidia  to indicate the bacteria’s origins. Which is to say, in the genus Glossina, which is placed in their own family Glossinidae  (or the Tsetse fly). It has a symbiotic relationship with the fly, unable to survive outside its host it provides the fly with nutrients that can’t be acquired from the outside environment, without it the female fly cannot reproduce. More research is being done on the bacteria, as it’s coupled with the transmission of African trypanosomes, or sleeping sickness. Being able to extract Wigglesworthia from the gut of the fly may prove to prevent sleeping sickness, however research is slowed by the fact the bacterial cultivation in a laboratory setting has been so far unsuccessful.

My name is John and I am a Junior standing biology student, hoping to pursue Physical Therapy after undergrad. I live in Fairbanks year round, but I have lived and traveled a lot of places! I took last semester off to travel South America and it was a great experience, but now I am ready for the reality of school again and am hoping for a good semester in micro! 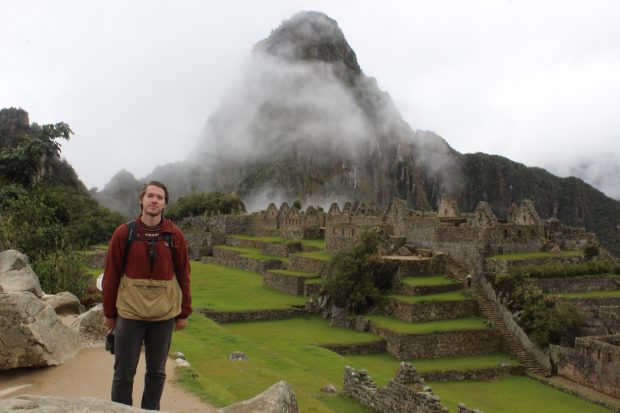