Title of the paper:  Isolation and analysis of abundant bacterium from allergy-prone canine’s interdigital space to determine pathogenicity

Brief description:  This paper reports my findings of the bacteria I isolated from my dog’s paw. I decided to isolate bacteria from my dog’s paw since he has allergies and, as a result, he has chronic  bacterial infections of  his paws. I was  curious to find out if the isolated bacterium  is  normally present on  canine skin or  if it was something unusual. According to PATRIC and Krona, my isolate contained mostly  Deinococcus radiodurans and a small portion of  Weissella  cibaria. Almost all of the physiologic testing and the cell/colony appearance  pointed to  Weissella cibaria. I did not find evidence  of having isolated D. radiodurans  other than  what PATRIC reported. Weissella  cibaria is normally found on  skin  and feces, so it  makes sense that I would find something like this on my dog’s paw. W. cibaria is also an opportunistic pathogen, so it makes more sense that this is the bacterium that is overgrowing  on my dog’s paw. It would have been nice to redo the  DNA extraction and  sequencing to  double  check  my isolate’s genome.

One image: Below is an image of what my TSA plates looked like after multiple isolation transfers. This image is a photo of Weissella cibaria  that I pulled from online. 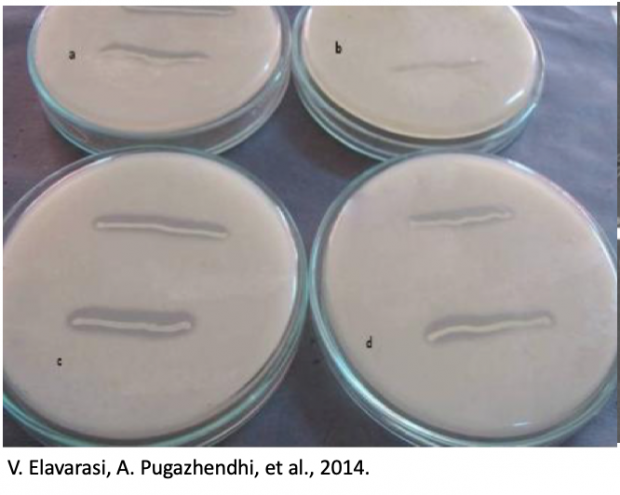 A functional link to my paper:  https://docs.google.com/document/d/1vJ8jWEtJjIsKNmLczCD1F4EBRGaUjav8yhzcl9eOWMM/edit?usp=sharing 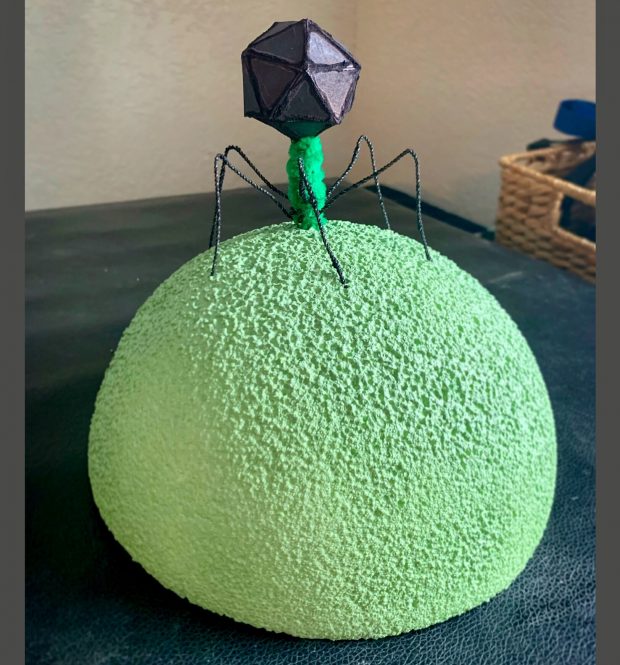 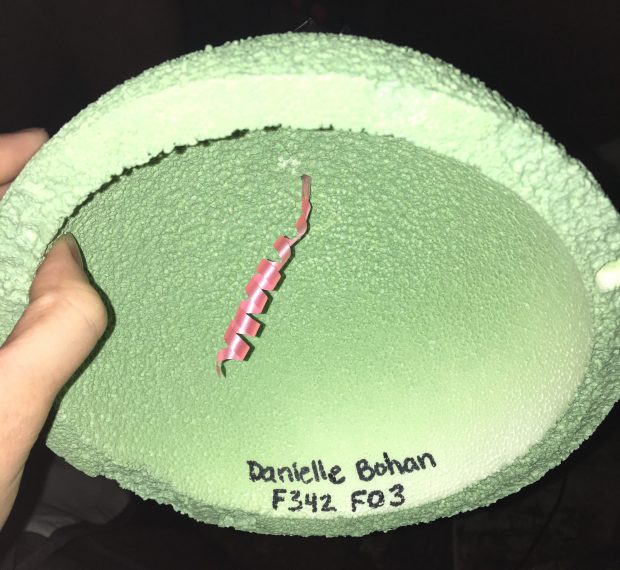 Bacteriophages are one of my favorite microbes. They are currently a part of important research, termed phage therapy, to treat superbug bacterial infections that are unresponsive to antibiotics. I have high hopes for this research and look forward to learning more about these very cool viruses.

Bacteria partners with  virus to cause chronic wounds

— Connections: We have discussed bacteriophages and bacterial infections amongst humans. We have also discussed how bacteria can grow at an exponential rate.

— Critical analysis: It is incredible that this was discovered. Amputations are very common amongst diabetic patients with an infected foot ulcer and a vaccine preventing the bacteriophage from infecting the immune cells could help prevent this from being so common in the future. I believe this article is easy to understand and would be easily digestible by the common public.

— Question:  Do you think the vaccine could prevent amputations and severe infections in diabetics? Please explain your logic.

Bacteria could become a future source of electricity

Summary:  Obtaining electricity from microbes has been performed in the past, but not very efficiently. There have been new advances in the ability to better harvest the energy produced by bacterial metabolism to try to come up with a reliable, renewable, and sustainable energy source. Enterococcus faecalis  is the bacterial species of focus in this study, a common bacterium found both in human and animal digestive tracts. With the use of a synthetic electrode, termed as a redox polymer, the researchers are able to better harvest electricity through bacterial cell walls.

Connections:  In class, we discussed the ability for bacteria to produce metabolic energy in which they are carrying out redox reactions; metal being the terminal electron acceptor. This is the same concept, but instead of metal being the terminal electron acceptor, the scientists are using an artificial redox polymer to prevent loss of energy in the transfer of electrons.

Critical analysis:  I believe that these scientists are on to something that can benefit our future in terms of utilizing different sources of renewable energy instead of burning fossil fuel. Also, it will help scientists better understand bacteria and how they play a role in their surrounding environment. This article did not give very much information on the methods of this study, but I believe  it is sufficient enough for the common public to understand the concept of what the study is about. 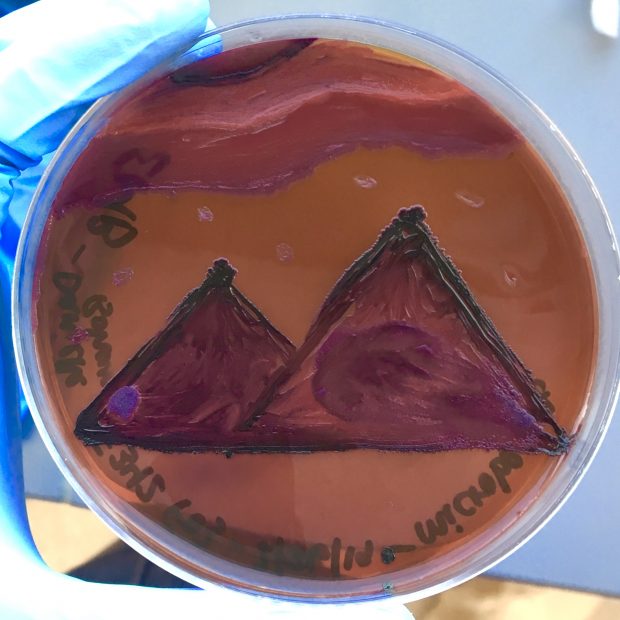 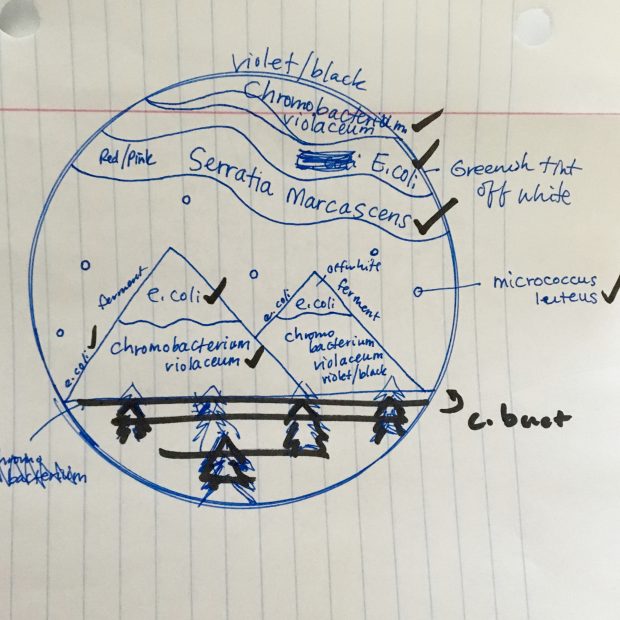 My artistic intent was to portray what I love about living in Alaska, which is mainly the beautiful scenery and solitude Alaska has to offer. My art piece on the Eosin Methylene Blue (EMB) agar, as seen above on the left,  didn’t turn out exactly how I had envisioned but I think it portrays the aurora and mountains with snow decently enough. The right image explains the bacterial species used and how I expected the colors to turn out. I think given more time, the bacterial pigment would appear more vivid but the image itself may appear less sharp so I decided to snapshot the EMB agar 3 days post inoculation.

The EMB agar is differential because it contains a pH indicator, eosin, that allows us to visually see whether the bacteria ferment the sugars available in the agar or not. Eosin will turn from colorless to red/black in a low pH environment which indicates that the bacteria have released an acidic product as a result of fermentation. The only bacteria used on my EMB agar that has fermenting capabilities of lactose/sucrose is E. coli, which has a strong capability of fermenting lactose. This turned the mountain top/outline to be a dark color. I also used it in the aurora  because I thought it would create a green sheen, but for some reason, it grew as off-white/pink. I am not sure if this is because it is encased between two other bacteria and they may be limiting the E. coli’s  ability to ferment the sugars available. I added the E. coli to the mountain tops and immediately after added the E. coli to the aurora, so I know I didn’t  make a mistake by adding an unintended species. Perhaps if I had given the plate more time in the incubator, I would have seen a similar resemblance of the E. coli on the mountain tops and the E. coli in the aurora. The rest of the bacteria used are non-fermenters, so the color that is seen in other areas is due to the pigment of the bacteria themselves.

I would also like to add that when I was choosing which bacteria to use, I made sure to use only gram-negative bacteria since the dyes used in EMB and the MacConkey agar inhibit the growth of gram-positive bacteria, which makes EMB and MAC selective media.

As of the new year, Clark County has confirmed 49 cases of measles. Of those diagnosed with the virus, 41 were not vaccinated with the MMR vaccination. Washington has recently declared a state emergency due to the rise of Measles cases throughout the state.

Washington isn’t the only state that has been affected by measles. California, Colorado, Connecticut, Georgia, Illinois, New Jersey, New York, Oregon, and Texas have also reported outbreaks as of 2019. A total of about 80 cases this year, with children being the main attributor.

Measles used to be devastating before the vaccination was released in the 1960s, with diagnoses  being in the hundreds of thousands in the US alone. The MMR (Measles,  Mumps, Rubella) vaccination has been about 93% effective in preventing the disease and with a booster that percentage goes up to 97%. It is noted that the sudden rise in the measles outbreak is due to children going unvaccinated.

This relates to what we have discussed in class because we have talked about epidemics, such as the plague. As mentioned above, in the US alone the diagnosed measles counts in a given year were as high as 800,000 in the 60s before the vaccination.

I find this very interesting because I am curious if this will encourage more parents to vaccinate their children more since there has been a debate that vaccines are not necessary, although they have proven to be effective. I didn’t know that the measles  vaccination was so reliable at preventing this virus. It makes me really happy my parents have vaccinated me during my childhood.

I believe that this story is scientifically factual because I did my research on other websites and found the data to be consistent. I also think they did a good job of making their message concise and understandable for the general public to be able to understand.  By using common language, this important message of an outbreak in the US is able to be delivered to US citizens.

Question: How much further will the measles  outbreak progress due to the decline of parents vaccinating their children?

Listeria monocytogenes is a gram-positive bacteria and has caused many outbreaks of food-borne based illnesses, a current outbreak being due to an infection of pork. This bacteria is named after Joseph Lister, the father of antiseptic surgery. Joseph Lister (1827-1912) wanted to experiment with ways to reduce post-operational infections, a significant problem of his time when aseptic technique was not conventional. Lister began to cover wounds in dressing soaked in Phenol and discovered the rate of infections had significantly decreased as a direct result. Lister then implemented sterilizing instruments and hand washing prior to surgery. The low rates of post-op infections were so remarkable at the time, his good practices were adopted by fellow surgeons throughout Europe. 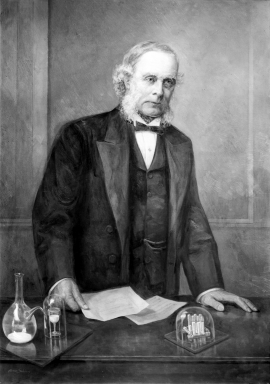 My name is Danielle Bohan and I’m taking this class as a prereq to obtain my Masters in a Physician Assistant program. I am extremely fascinated by microbes and understanding how lifeforms coexist. I am looking forward to learning as the class  progresses and I hope everyone has a good semester. 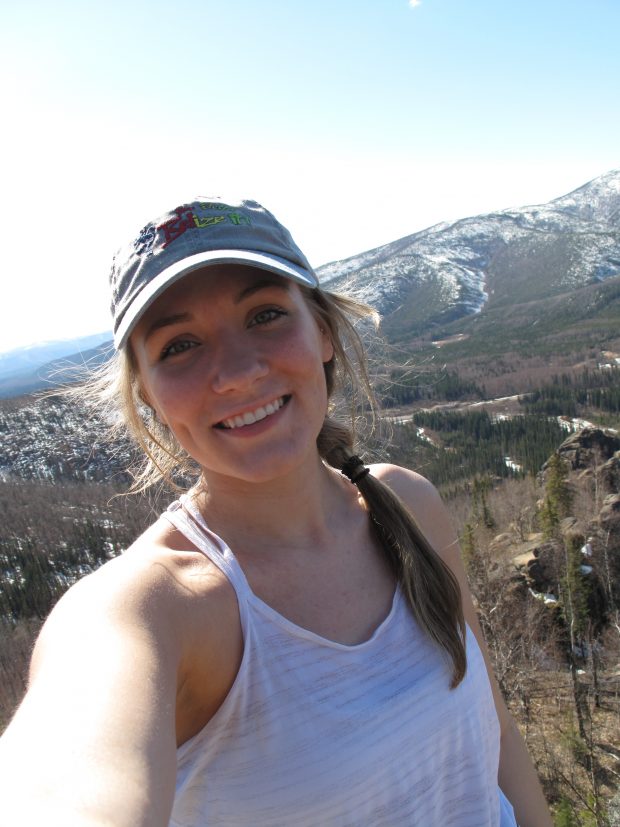