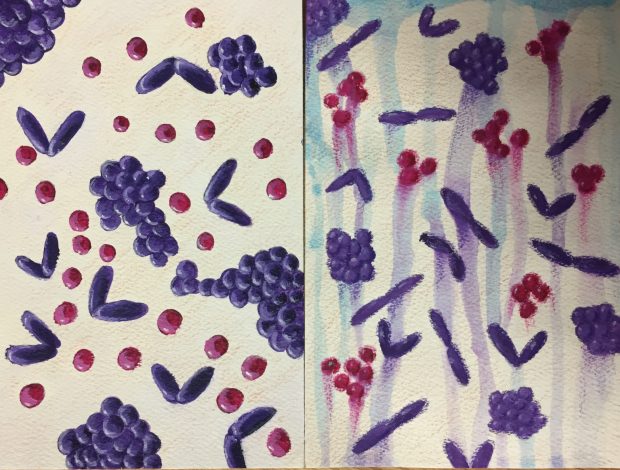 My piece is called Barriers. It depicts several types of innate resistance the body uses. The first half of the piece depicts common microbes found on the skin. Skin is a very important part of innate resistance, because it provides a barrier between microbes and sterile parts of the body including the blood and muscles tissue. I used acrylic paint for the first piece and painted microbes on water color paper. Pink and purple paint were used depending on if they are Gram positive or Gram negative. For skin I colored paper a skin tone to represent skin, though it didn’t show up very well in photographs. The microbes I depicted were Staphylococcus, Corynebacteria, and Micrococcus species, which are commonly found on the skin. The second part of my piece depicts how the enzyme lysozyme breaks down bacterial cell walls. Lysozyme is also an important part innate resistance, because it prevents bacteria from getting into the eyes and causing infections. I used colored pencils and water colors for this part of the piece. The colored pencils were used for outlining and shading, and the water colors were used to fill in the cells and to depicts the tears. Again I used the colors to depict if the bacteria were Gram positive or Gram negative, and used the same types of bacteria first part of the piece. The blue water color paint was dripped down the paper and caused the water color paint I used for the cells to bleed down the paper representing how the bacterial cells are killed by lysozyme in the tears.