On the MacConkey agar plate, I tried to create an abstract sunset (except the sun is not setting behind anything).   I used S. marcescens  in the center of the plate because it is not a lactose fermenter.   I was hoping it would turn the center of the agar yellow by releasing ammonia and increasing the pH and leave the microbes colorless/yellowish.   Around the outside, I used E. aerogenes because it is a lactose fermenter.   I was hoping it would leave the outer portion of the agar more pink by releasing acidic lactose fermenting products and turn the colonies pink.   In between the center and the outer rim, I tried only using a few streaks from both bacteria to kind of blend them together and form a gradient of color without completely contaminating either of them.   The idea kind of worked as I had hoped because the bacteria on the outer edge turned more pink, and the bacteria in the center stayed a lighter yellowish color, but the entire agar eventually turned yellow after letting the plate sit for a few days.   This means S. marcescens probably released more ammonia product than E. aerogenes released acidic lactose fermenting products, which increased the pH of the entire agar.   The picture with my hand in it was taken after one day of incubation at 37 °C, and it has more of the coloring I was going for when I created the plate.   The other picture was taken three days after I made the plate.   The plate was incubated for one day, and then sat at room temperature for two days.

On the TSA plate, I tried to create a pretty flower with petals of two different colors, but it did not turn out exactly as I had hoped.   Since the TSA plate is not a differential plate, I did not expect the agar to change colors.   I tried to use S. marcescens  and  C. freundii to create pink and white petals.   The big petals closest to the center were made with S. marcescens, and they were supposed to be pink, but they did not turn out that way.   This could have occurred because the original plate that I streaked it from might have been contaminated with a different bacterium.   The smaller petals around the outside were made with C. freundii, and they did turn out kind of white like they were supposed to.   In the center, I used  M. luteus  because I wanted the center of the flower to be yellow, like pollen, and it actually did turn out yellow.   Even though the pink petals did not turn out how I was expecting, you can still tell it is a flower. 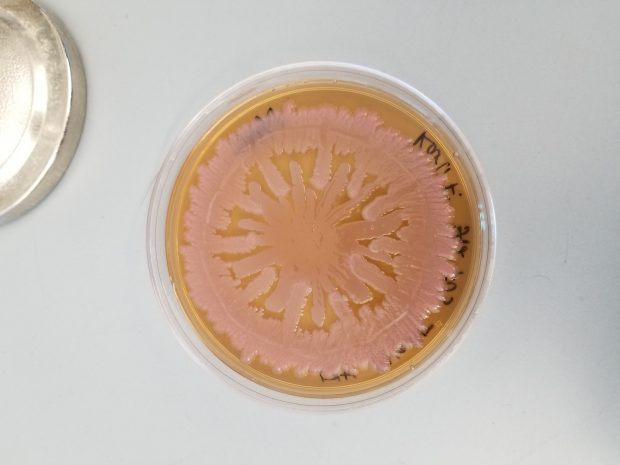 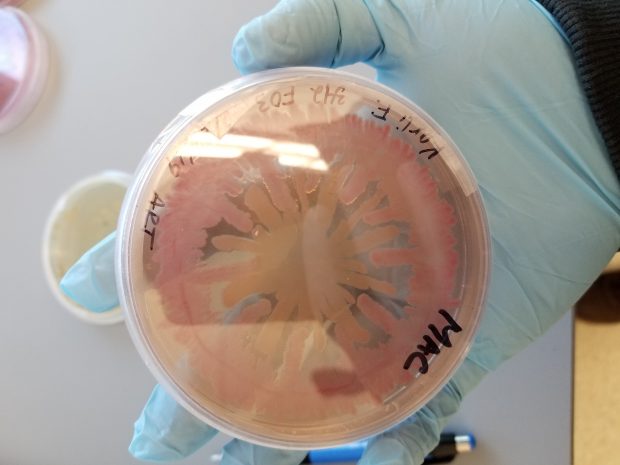 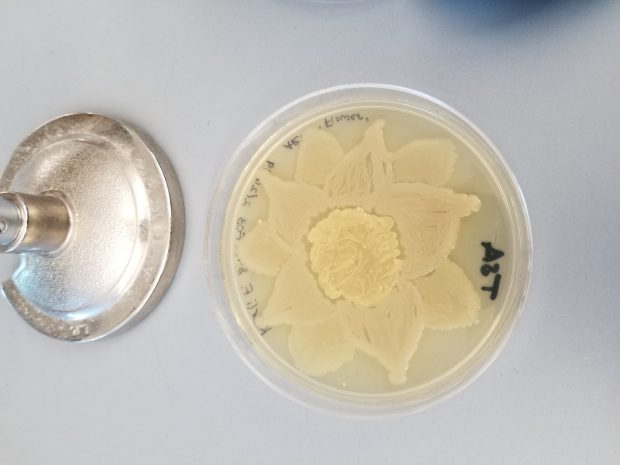