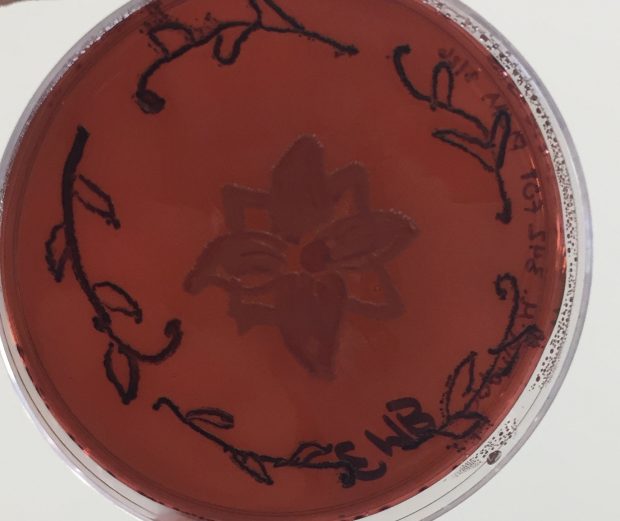 On the EMB plate I decided to draw a floral design with vines surrounding a flower, because I thought it would look nice with the red background. EMB selects for gram negative microbes, so I had to work within those confines. I chose Escherichia coli for the vines, because it strongly ferments lactose, and turns black-green on the EMB plate. For the petals I chose Enderobacter aerogenes, because this microbe does ferment lactose (though not as strongly as E. coli) and would turn pink or red on the plate. Finally, I chose   Serratia marcescers  for the center of the flower, because it will become colorless due to the fact it doesn’t ferment lactose. It seems like the microbes did what what expected, except for the center, which tuned red instead of colorless. The plate did not change color.

On the MAC plate I drew a sailboat in the water, because I like sailboats. MAC also selects for gram negative bacteria, and the color change is based on lactose 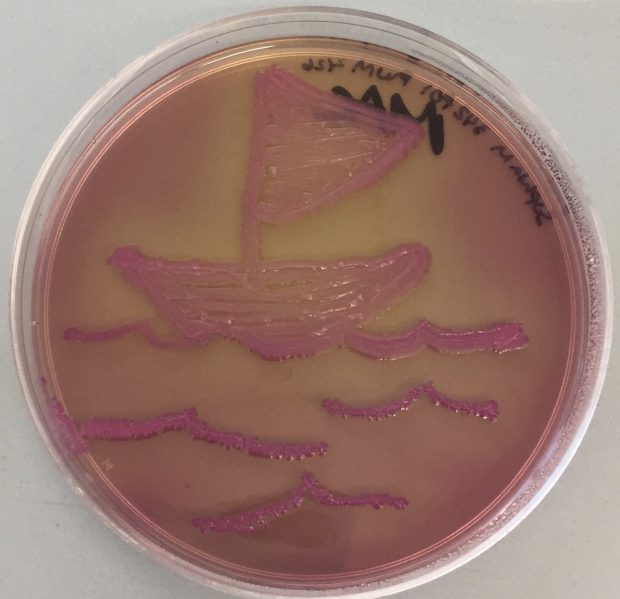 fermentation. I chose a to use S. marcescens  as the boat and sails because it is not a fermenter, and would show up as colorless on the plate due to increasing the pH of the plate. I thought a colorless boat and sails would contrast nicely with the pink color of the plate. I then drew waves with E. coli because it does ferment lactose, and would produce a pink color in the agar. I thought that drawing waves would increase the contrast with the boat. The boat isn’t really colorless in the picture, but a lighter pink, but the surrounding plate is colorless. The E. coli definitely turned a darker pink than the rest of the plate however. 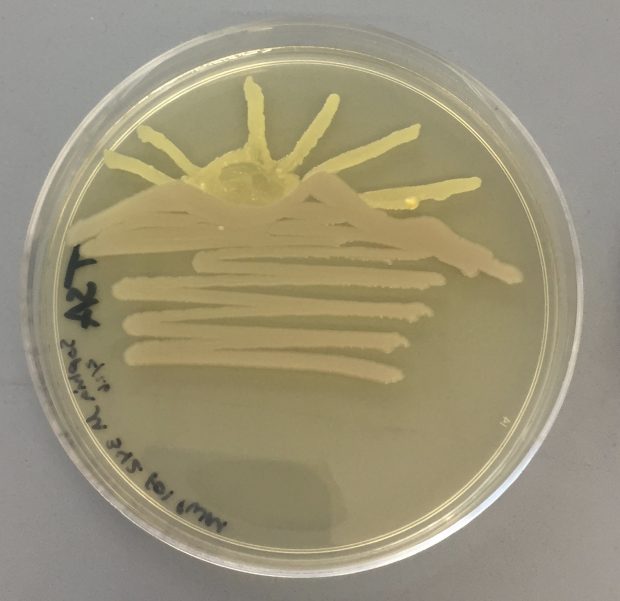 On my TSA plate I drew mountains and the sun, because I love painting landscapes. TSA plates are not differential, because they don’t change color depending on pH (or other) changes. I chose Micrococcus leteus for the sun, because it turns yellow. I then chose Serratia marcescens  for the mountains, because I thought red or pink would be a good contrast to the agar color and the yellow M. leteus. When I checked on the plate the mountains had not turned pink yet, but were white (which looked really nice as well). The sun was a   bright yellow which looked very nice.