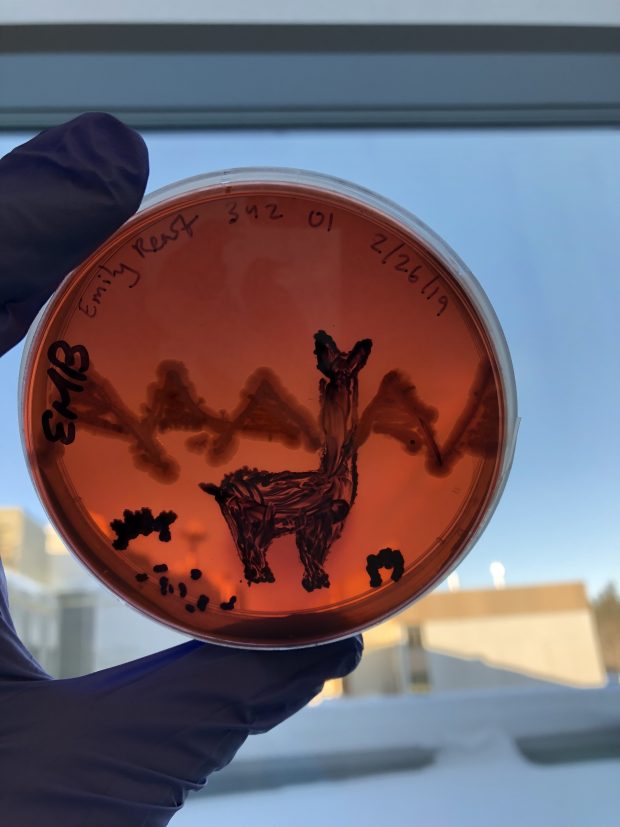 My intent was to paint a typical scene of a llama in a field within a mountainous area such as the Andes in South America. I tried to have a dark silhouette of the llama with colorful mountains and grasses in the surrounding area.

This art was done on an EMB agar plate, so it naturally had a darker background than the other medium options in lab and selects against Gram positive bacteria. This photo was taken three days after inoculation, and I thought this photo was taken at a good point that represented the artistic coloring that I hoped for. The black color, which I used for the llama, was caused by Chromobacteruim violaceum, a Gram negative bacteria. The mountain outline was painted with Serratia marcesceus, another Gram negative bacteria. To fill in the tops of the mountains and  represent snow, I used Citrobacter freundii, another Gram negative bacteria that I hoped would produce more of a white color. The patches of grass were painted on with Escherchia coli, Gram negative, because I hoped it might turn out to be dark with a green tinge. The color of the Escherchia coli did change though since inoculation. This was likely due to the reaction it had with the EMB medium and because the bacteria produces acid. The colors of the other bacteria didn’t show any significant color changes over time, probably due to the similarity in the medium from which they were growing off beforehand. This is an excellent example of a differential medium as well because of the differences in visible colors and the fact that all bacteria placed originally on the plate did visibly grow.