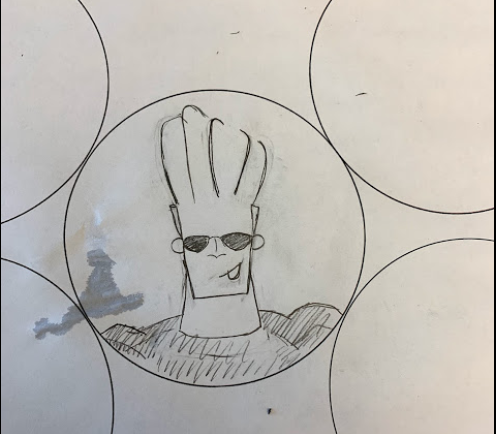 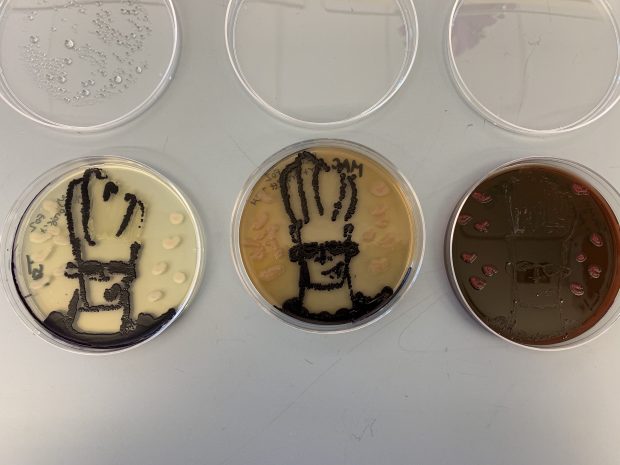 Bevyn Cover F02—–My intention with my painting was to draw my favorite cartoon character, Johnny Bravo. I decided to draw the same picture on all three mediums using the same bacteria every time to see what the difference in medium would mean for the bacteria’s growth. One problem I encountered was how hard it was to track what and where I had drawn, and trying to not use too many plastic loops but also not cross contaminate them. I think that’s why my TSA plate turned out the most funky in that it was the first one I did and didn’t think it would be as much of a problem.

On the MAC medium( (pictured in the middle): His yellow hair didn’t grow because MAC inhibits the growth of Gram-positive bacteria. The background dots were also a slightly deeper shade of red/pink and this indicates to me that that bacteria was consuming the lactose and creating acid as a bi-product, lowering the pH. I think the picture turned out the most clear.

On the EMB medium (pictured far right): This plate gave me the littlest growth, the only thing that grew with any sort of visibility was the background dots, telling me they are Gram-negative bacteria and turned deep red meaning they fermented the lactose given. Upon closer inspection a small amount of tiny black colonies formed on the outline telling me they are most likely gram negative but do not thrive with the given sugars/nutrients.

On the TSA medium (pictured on left): all of my bacteria grew, but the yellow of his hair didn’t grow so well, but I think this is because I only gave it two days to grow. With all bacteria being present in some way on my plate tells me that it is not a differential medium and gives a variety of nutrients so many different types of bacteria can grow.