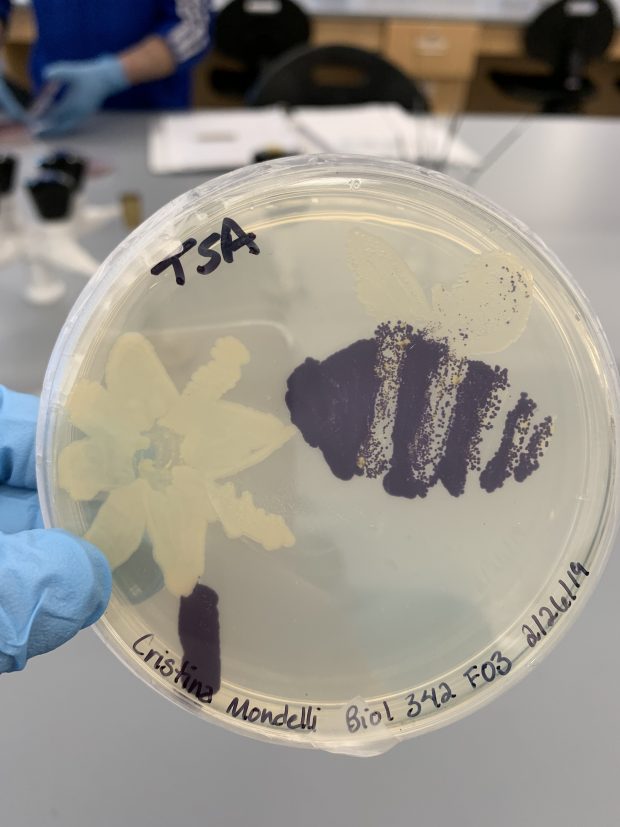 My artwork was supposed to depict a bumblebee and a flower. I used M. luteus for the “yellow’ stripes on the bee and the center of the flower, but it did not grow very well. It might have needed more time in the incubator, but I was worried about the C. violaceum taking over and overcrowding the stripes, so I placed it in the fridge prematurely. The E. coli grew well, but got contaminated in the white of the wings. My flower was disappointing because I used S. marcescens which I expected to turn pink. For some reason, it failed to turn pink and left me with a white flower. Additionally, the M. luteus did not grow in the center of the flower.

While I did grow other pictures on the differential media, I liked how the TSA grew the best. The TSA was not extremely selective and was designed to allow the majority of culturable microbes to sustain life for lab purposes. TSA remains the same color regardless of what grows on it, even though the colonies themselves have color. It does not change color to indicate a change in the pH or only encourage a certain characteristic of microbe to grow. Because growing microbes on the TSA plate does not indicate any special characteristics of the microbes, it is not differential either.