—  Summary:  Researchers from MIT have established organism relationships between fungi and bacteria by reviewing the gene for chitinase (an enzyme which helps to break down chitin). Their review of the mutations, and similarities across different species has allowed them to create an evolutionary tree which correlates microbial evolution with fungal evolution. They found that approximately 450 to 350 million years ago, diversification of three separate bacterial groups diversified as the result of gene transfer with a chitinase utilizing fungi. Below is the resulting evolutionary tree with the fungi identified by purple lines and bacteria with blue lines. 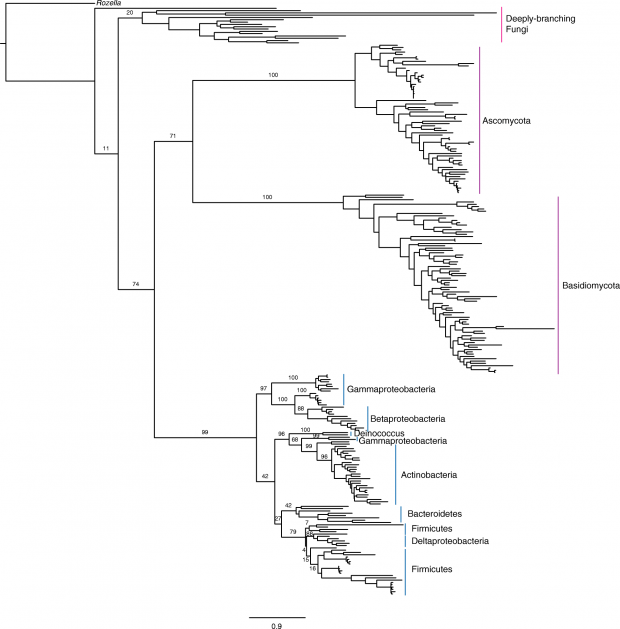 —  Connections:  This connects with: Microbial evolution, metabolism, and diversification.
Chitinase allows these bacteria to metabolize chitin as an energy source. This allowed diversification of microbes into new niches ones chitin became more prolific in the environment. Gene transfer was said to make it difficult to genomically identify or differentiate bacterial strains, but here the gene transfer has allowed a better understanding.

—  Critical analysis: I found this article very interesting because, most evolutionary trees are based on rRNA sequencing (highly conserved due to form/function). The use of chitinase to correlate evolutionary relationships between fungus and bacteria is interesting. Especially since the origin of chitinase was in a Fungi (a microorganism that doesn’t look like a microorganism) and the gene has been horizontally transferred to bacteria.

The story was very well written and after reading the original journal publication, it was factually and accurately written. The author did as great job in conveying the information to the general population without losing the integrity of the research. I appreciate the writing style and how it helps those (like myself) who aren’t as well versed in the scientific nomenclature, to understand the information and findings from the research.

—  Question:  How many other highly conserved coding regions can we isolate and use in this manner? Are enzymes such as chitinase always highly conserved, or is there slight variations in the conformation, allowing it to mutate without ruining the function of the enzyme?

I completely agree with your analysis of the article. While it may not exactly have been something I was interested in, it did convey the message clearly and concisely. The use of chitinase was something I was not familiar with and can be used to confirm other techniques. While I didn’t find the complete answer to you first question I did see that sites 1844-2470 were mentioned. For your second question it showed that they are always highly conserved but poorly aligned.