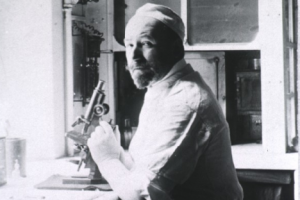 Victor Morax was a Swiss ophthalmologist, born March 1866 in Morges, Switzerland, who discovered the bacillus family Moraxellaceae, genus Moraxella. Moraxella are gram-negative bacterium that are short rods, coccobacilli or diplococci, Moraxella are sometimes phenotypically confused with Neisseria. There are thirteen species of Moraxella that reside in mucosa in humans and animals and often cause infections when the opportunity arises. The bacterium was also discovered during the same time, 1897, by German ophthalmologist Theorod Axenfeld; thus leading to the joint name of Morax-Axenfeld diplobacilli.

Victor Morax studied in Germany and Paris becoming a Doctor of Medicine in 1894. He worked at the Pasteur Institute from 1891 to 1902 where, in 1896, he discovered Moraxella which is associated with conjunctivitis in humans. Between 1903 to 1929, Morax worked at the HÃ´pital LariboisiÃ¨re then went back to become a permanent member at the Pasteur Institute in 1929. Morax published four articles, most notably Le Trachome and he was also an editor for the journal Annales d’oculistique.