Salmonella enterica was named after Dr. Daniel E Salmon (1850-1914), the very first doctor of veterinary medicine in the United States. While working for the Bureau of Animal Industry, Dr. Salmon’s colleague, Dr. Theobald Smith discovered a bacterial species while investigating hog cholera. Smith named the bacterial species Salmonella cholerasius (USDA). However, it was discovered later that this was not the cause of hog cholera, so the name was revised to Salmonella enterica in the 1980s, as suggested by Kaufman and Edwards in 1952 to avoid confusion (EuzÃ©by, 1999).

Dr. Salmon was born in Mount Olive, New Jersey in 1850. He attended Cornell University where he earned his bachelor’s in veterinary sciences, then his Doctor of Veterinary Medicine. He graduated in 1876 and was the first doctor of veterinary medicine in the United States. He opened his first clinic in 1876 but left a year later. In 1879, Dr. Salmon was devoted to eliminating contagious pleuropneumonia in cattle.

After his research on pleuropneumonia, Dr. Salmon was hired by the USDA to research infectious diseases, specifically cattle fever. Once the Bureau of Animal Industry was formed,  “Dr. Salmon built it to focus on research, pathology, and bacteriology’ (AVMA, 2013). Around this time, Dr. Smith discovered the bacterial species that would earn to name of Salmonella enterica (formerly cholerasius).

Finally, in 1905, “Salmon became the director of the National Veterinary School in Montevideo, Uruguay. He left the school in 1912 and died August 30, 1914’ from a pneumonia infection (USDA). Although only 64, he left a legacy that continues to inspire those who practice medicine today. 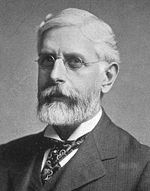